With menu options such as “Panty Dropper,” “Booty Call” and “Hard On,” an apparent new business in Redwood City is definitely getting a rise out of some residents.

It appears Pink Pantherz Espresso is moving into the space formerly occupied by the old Caffino at 2797 El Camino Real.

We reached out to the company today for comment. When it comes to details, the owners were not prepared to bare it all. We received this stripped-down statement:

“Thank you for the interest in our company, we are currently finalizing everything and as soon as we are done will contact you with all the details.”

We first learned about the business from the Facebook forum, “Redwood City Residents Say: What?” where locals on Tuesday posted photos from outside the old Caffino where a Pink Pantherz Espresso sign has been erected on the storefront.

Established in 2014, Pink Pantherz Espresso has three locations — in Fremont, Modesto, and Fresno — and bills itself as “The Best Bikini Coffee Shop,” according to its website.

“We offer up the very best in Espresso beverages, including lattes, mochas, and our famous pink panthers pleasures beverages,” the company said. “We also serve pastries and treats, made fresh for us each day by our local bakery, and invite you to come by and try our new iced Italian Sodas, a favorite out in these parts during those hot summer months or a hot cup of coffee served by an even hotter barista!”

While the business has received decent Yelp reviews, the possibility it will open in Redwood City received mixed reactions in the Facebook forum, with one commenter noting “there’s no way in hell I’d be ordering an ‘Irish Babe.'” A mom said she will “never be able to go through that drive thru with her kids,” but not everyone was critical.

“I guess I know where I’m getting my coffee now,” said one man, while a woman called out others for being prude.

“Ya’ll ever take them to a pool where women are in bathing suits?” she wrote. “I mean basically in underwear.”

During the incident, Redwood City Fire blocked access to Canyon Road from both Oaknoll and Harding.

No injuries were reported.

The Redwood City Fire Department posted the above photo from the scene.

An informational kiosk will be installed in historic Union Cemetery following unanimous approval by the Redwood City Planning Commission on Tuesday.

The kiosk will measure 10-feet, 2-inches in height and 7-feet, 7 inches in width. It was reviewed and approved last month by the Historic Resources Advisory Committee, which is protocol for any alteration or improvement to an historic resource. The kiosk will be constructed out of wood and the design will include “ornate architectural detailing underneath the gables” in order to blend in with other cemetery structures. 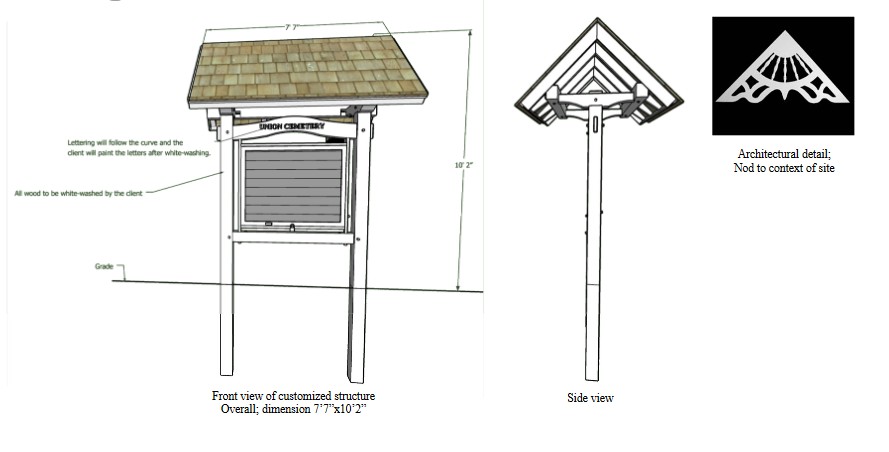 Award-winning?  Yes, that would be our Redwood City Public Library.

Maybe you were there for “Meet Your Chefs” – a peek inside the kitchen at some of Redwood City’s best restaurants, or “Speed Meet Your Neighbors” – 3-minutes apiece to meet, greet and maybe make some new friends.  And of course, who can forget “Meet Your Librarians” – introducing the face behind the book (well, not the author – but the person who checks out the book)!

It’s all part of helping new arrivals here feel at home, and making sure even long-time residents know everything that’s going on in our town (because there’s a lot).  And it’s all part of the work honored by the California Library Association.

So congratulations to everyone at the Redwood City Public Libraries, downtown and branch libraries!  And don’t forget to check out a summer reading book or two.

The announcement that Mike Callagy had been named as the new San Mateo County manager touched off a wave of delight throughout the county.

Retiring County Manager John Maltbie had groomed Callagy for the job, naming him assistant county manager in 2016, three years after he joined the county, following 29 years with the San Mateo Police Department.

Between his high-profile position in San Mateo and his tenure at the county, Callagy built a reputation as a positive presence who relished getting things done and making county government work more effectively.

Born and raised in San Mateo County, Callagy has deep roots in the community and a wide network of those who have worked with him.

It’s always an interesting question whether it’s an advantage or disadvantage to stay with an organization and seek to move up. Familiarity can be a benefit, but a new face often is seen as fresh and, therefore, intriguing.

Insiders say the finalists included a strong candidate from elsewhere in the Bay Area, and, among other things, that’s another sign of a longstanding problem that plagues local government in the region.

Bay Area local governments are finding it nearly impossible to hire a high-level manager from outside the region. More than one public agency has recruited executives from somewhere else in the country, only to have them come to the Bay Area, take one look at the housing costs, turn around and head back.

That reality was implicit in the finalists for the county manager position, both of whom already live here.

And it means that local governments increasingly will poach from one another for the next city manager, public works director or police chief.

A FAMILY LEGACY: Many things undoubtedly will be said about San Mateo County Manager John Maltbie as his final retirement date approaches, but one of them that shouldn’t be overlooked is his ability to imbue in his family the spirit and value of public service.

John’s daughter, Jayme Ackemann, is director of Corporate Communications at San Jose Water Company, a private company with a very public mission. Before that, she worked for SamTrans and Caltrain and the Santa Clara Valley Transportation Authority, carrying on the family tradition of public service. Jayme had the burden of working for me at SamTrans and Caltrain and there is no one brighter, more innovative at communications and more dedicated to the public good.

John’s son, Jeff Maltbie, has been the city manager of San Carlos since 2010, during which he has transitioned from one of the county’s younger, up-and-coming city managers to one of the most experienced civic leaders, a steady hand in a city often struggling with change.

And now, John’s daughter-in-law, Shawnna Maltbie, has been named interim city manager of Daly City, where she has been director of Human Resources.

A LITTLE MORE ERNIE: Last week, we reported that Redwood City Planning Commissioner Ernie Schmidt had changed his mind since February and said he would enter the increasingly crowded city council race.

We had a chance to catch up with him and talk further about why he changed his mind.

An unsuccessful candidate for the City Council once before, Schmidt said his decision ultimately was spurred by his concern that the special character of Redwood City’s neighborhoods is under threat.

As an example, Schmidt cited a 4-1 vote on the Planning Commission approving a proposal by Mozart Development Company to tear down eight residences in the Mt. Carmel neighborhood and replace them with 17 market-rate townhomes.

“When we created the Downtown Precise Plan, we definitely committed to the community that the growth we were going to experience downtown was not going to change the overall character of our community. We are starting to see that it is,” Schmidt said. He is running, he said, to “create some safeguards and tools to protect our neighborhoods.”

Herrera is the first woman, and only the third person, to assume the job in SVCW’s nearly 50-year history. She succeeds Daniel T. Child, who retired from public service and started a wastewater consultancy business.

“Our Board is delighted to unanimously appoint Teresa as manager,“ said John Seybert, SVCW Commission Chairman.  “Teresa’s background in private-sector leadership, and her years at SVCW as the assistant manager and chief engineering officer, have prepared her well to lead the organization into the future.”

Herrera started at SVCW in 2008 to create the first engineering department and to manage capital improvement efforts costing hundreds of millions of dollars.

She has won multiple awards for her contributions to the industry, including the 5-S shovel award given by the California Water Environmental Association. The 5-S part stands for “Select Society of Sanitary Sludge Shovelers.”

In a statement, Herrera said her focus in the last 10 years “and now continuing forward” is improvements and replacement of aging and failing infrastructure, as well as resource recovery in the form of water and energy.

“As manager my focus is maintaining strong leadership and mentorship within SVCW, ensuring success with the Agency’s RESCU program, and maintaining positive relationships with SVCW’s member agencies, Commission, and our 220,000 customers,” Herrera said.

Sports Basement announced it is set to open its largest location in Redwood City.

The sporting goods retailer will open its 10th Bay Area store in the recently-closed Toys ‘R’ Us and Babies ‘R’ Us sites at 202 Walnut St. Sports Basement is already working at the site and aims to open in time for the holiday season, which also coincides with the company’s 20th anniversary, the company announced last week

The company’s largest store will have a total of over 88,000 square feet of space. And like the other stores, the Redwood City location will include space set aside for the community, including gathering spaces, comfy couches, children’s play areas and more.

“We’d been searching for a perfect spot in the mid-peninsula for over a decade,” says Aaron Schweifler, director of operations. “As soon as we saw this space, we had huge visions for it.”

Updates about the store’s progress can be found on Instagram at @sportsbasementsouthbay and on its blog.

One person was injured in a two-car crash in Redwood City on Saturday night, according to fire officials.

The incident was reported at about 9:39 p.m. at the intersection of Middlefield Road and Charter Street, according to the Redwood City Fire Department.

Redwood City police are seeking one of two suspects involved in an assault and stabbing near the 7-Eleven store on June 30.

The incident occurred about 2 a.m. at the store at 460 Woodside Road, when two victims, men ages 23 and 24, went to make a purchase and were confronted inside the store by two men yelling gang slurs. The suspects lured the victims outside, attacked them and stabbed one of the victims, who required emergency medical surgery but is recovering, police said.

One of the suspects, 24-year-old Justin Guidici, was detained at the scene by responding police. The other suspect, 32-year-old Abran Gutierrez, fled and remains at large.

Guidici, who was booked into San Mateo County Jail for various charges including participation in a criminal street gang, was later released from custody on bail. However, he was re-arrested on Wednesday, July 5, after Redwood City police detectives executed search warrants on his and Gutierrez’s homes, which are in Redwood City.

A suspect was arrested in connection with a stabbing at Denny’s Restaurant in Redwood City about 6:15 p.m. on July 5, police said.

At that time, Redwood City police responded to a 911 call about a stabbed victim at the restaurant at 1201 Broadway.

When the officers arrived they located the suspect, 35-year-old Francisco Legoretta (pictured), exiting the restaurant. He was detained without further incident, police said.

Inside the restaurant, a 22 year old man was found lying on the floor with multiple stab wounds. Police administered life saving measures to stem the bleeding before Redwood City fire personnel and paramedics took over, police said. The victim was rushed to an area hospital, where emergency surgery was performed, police said.

Legoretta was subsequently booked into the San Mateo County Jail for charges of attempted murder.