The scurry might explain the flurry, and, in some instances fury, of reaction to the recently circulated picture of the proposed County Office Building 3 (COB3) building at the San Mateo County government center in Redwood City.

You can see an architect’s conception of what the building could look like by going here.

Now, that preceding sentence had a lot of prevarication in it. The look and design of the building is just a concept. As in, idea or notion.

None of which stopped social media posters from immediately protesting that the building was completely out of synch with what Redwood City residents want. This led, inevitably, to further postings criticizing the county as heavy-handed. Then we were off to the races about what’s wrong with government and how life in the city is going to hell in a handbasket.

But let’s start by saying a few things, which might even qualify as that ever-elusive thing we call fact.

The unveiling of the proposal actually signaled the beginning of the public comment process and cooperation between the county and the city, not the end.

Anything new and modern on this site would be an improvement over the aged Hall of Justice, which sits next to the site, and is a sad building, above and beyond the justice meted out inside it.

The conceptual drawing is actually impressive – kind of a spinoff of the landmark Guggenheim Museum in New York City. It’s utterly undeniable that there are no buildings that look like that in Redwood City. 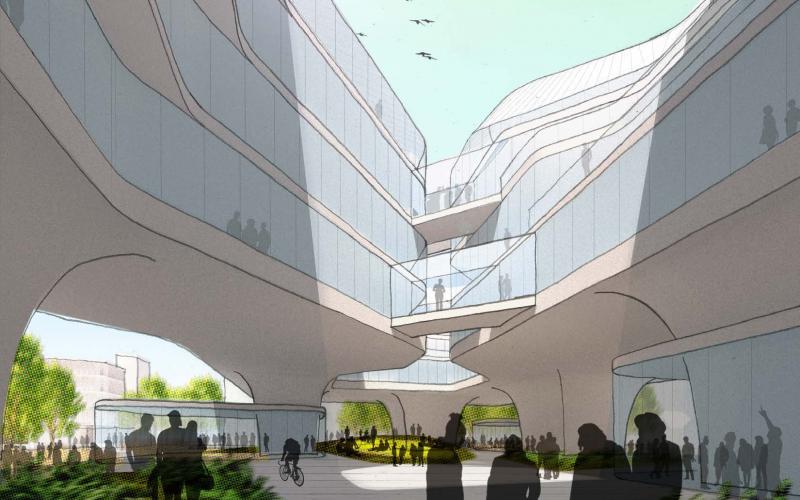 If there were anyone with cause to be upset, it would be Redwood City Council members, some of whom apparently were taken by surprise at the disclosure of the building proposal when it was described recently to the Board of Supervisors.

That prompted Mayor Ian Bain to write to the county, noting that the publication of the proposal in the San Mateo Daily Journal “was the first time that I had seen this drawing, and I have confirmed with our staff that Redwood City staff has not been involved in the process of designing County Center, despite assurances from County officials that we would be.”

Well, you’ll be pleased to know peace has prevailed. City staff, county staff, Supervisor David Canepa and Mayor Bain met this week and they’re all on the same page: The design process is just beginning, there will be a minimum of three community meetings, the public will have a chance to weigh in on the design and the city will have ample opportunity to influence a project that will have significant impact on the surrounding community.

“I’m much more at ease,” Bain said in an interview.

Deputy County Manager Mike Callagy, heading up the effort, said the county wants to provide a total package – an environmentally advanced building that is a good place to work, a good setting for the public who uses it, and is an asset to the community, with a park-like setting and open, public space.

Final design is a year away, Callagy said. Meanwhile, everyone is supposed to meet again next week.

ON THE TEAM: Speaking of Canepa, he was among the dissenting votes on a 10-6 vote approving Highway 101 toll lanes by the City/County Association of Governments.

That prompted some to speculate that Canepa was forging a role as an outsider on the Board of Supervisors. Not so, said Canepa in an assertive, almost combative, interview.

All those funds “can be programmed in other ways,” he said, hence his vote against toll lanes, which he doesn’t like at all. “I don’t think it’s good for the area.” He said toll lanes are inequitable and give preferential treatment to some drivers. “I don’t think people should move ahead of others,” Canepa said.

Canepa also said he works well with his board colleagues, none of whom endorsed him in 2016, that he has worked on legislation with each of the other supervisors and that he has voted with his colleagues in all but a very small number of times.

Planning Commissioner Chris Sturken has won the Redwood City Council District 2
Today, the County released its latest vote count report. The County Elections
Following several weeks of controversy over his refusal to state a definitive
If any single Peninsula community is ground zero for the tensions that
Candidates for the Redwood City Council race perhaps got more than what
Go to Top