Protesting the proposed closing of schools, nearly 200 parents, children and their supporters waited for an hour outside Redwood City School District headquarters Tuesday morning to urge Supt. John Baker to find another way.

Chanting “Si se puede” (“Yes, we can”), the Latino civil rights rallying cry, and with Hawes parent Juan Servin banging on a big circus drum, the protesters walked from the downtown library to the Bradford Street headquarters about eight blocks away.

They made their points with a variety of signs, mostly in Spanish:

“Do not uproot our school.”

“Our message is that the (reorganization) plans put the heaviest burden on the Latino community,” said Laura Garcia, a walk organizer from Selby Lane, where more than 400 students would be displaced under the proposals. 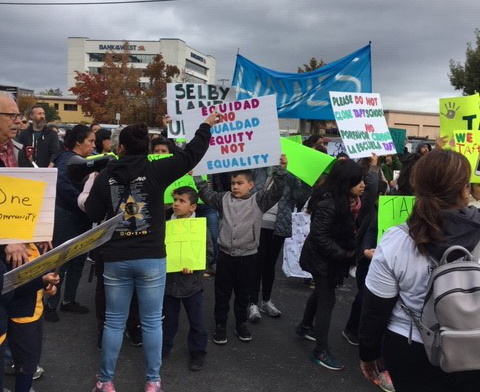 The protesters demanded that Baker, who was in a meeting, come out and address them. While children filed in and out of the building for bathroom breaks, Adelante parent and Selby Lane teacher Ivanna Zelaya-Clark used an electronic loud speaker to call Baker to “come out and talk to us. It’s your job. The community is more important than anything.” The crowd picked up a chant, “We want Baker.”

At 10:45, Baker emerged and addressed the crowd in Spanish.

“Let us work with you to get over this hump,” he said.

He urged the protesters to attend Wednesday’s board meeting at which trustees are to act on his proposals to begin a reorganization designed to close a $10 million budget shortfall created mainly by declining enrollment.

The plan as it stands is to close the Fair Oaks, Hawes, Orion and Adelante campuses, with the Orion parent-participation and Adelante Spanish Immersion programs moving intact to John Gill and Selby Lane, respectively. Fair Oaks  students are to go to Taft, and Hawes students to Roosevelt, Henry Ford or John Gill. About 1,900 students would have to change schools.

Some speakers suggested alternatives, such as closing Roosevelt instead of Hawes, and moving the Spanish Immersion program to the Kennedy Middle School campus, which would keep Selby Lane intact.

Members of the Adelante and Orion communities, though their programs are saved, attended the walk to support the schools most affected.

“I understand that the district has to make cuts, but we should ALL make cuts,” said Adelante parent Kate Loftus. “Distribute the pain so all are contributing. What’s the message in leaving white schools untouched?”

Baker listened to statements by Selby Lane eighth-grader Carlos Medina, Norma Gomez of Selby Lane and four others, and asked for their written notes to add to his large collection of community feedback.

Photo of Supt. Baker addressing the crowd by Bill Shilstone