In response to sharply rising public pension costs, Redwood City is proposing to reduce benefits for retirees hired after Sept. 1, 2018.

At tonight’s meeting, city council heard the staff’s proposal, although changes won’t move forward until the city has met and conferred with all bargaining groups for city unions. Should all agree to the proposal, the city estimates savings of $2.4 million over the lifetime of current employees, with annual savings for all employee groups estimated at $262,000 in fiscal year 2018-19 and increasing over time, according to a city staff report.

The proposal is one of several ways Redwood City is looking to address a growing pension crisis that is impacting cities statewide. Redwood City’s current unfunded liability for retiree health benefits stands at $58 million. The city’s annual payments to the pension fund are expected to double from FY 2016-17 through FY 2024-25, aided by a decision by CalPERS’ board earlier this year to shorten the amortization period for certain sources of unfunded liability from 30 years to 20 years, according to a San Mateo County grand jury report.

In FY 2018-19, all city departments were forced to shave $3.7 million from their budgets to keep the city in the black. The city’s deficit is expected to reach $12 million annually in five years, further crippling the ability to maintain existing city services levels, including in police, fire, park maintenance and after-school programs.

In addition to negotiating with unions, the city is also pursuing a half-cent sales tax measure and a cannabis tax measure for the November ballot to raise revenue, and recently increased developer fees. For more information about the city’s financial situation, visit its recent blog on the issue and view this by-the-numbers report: 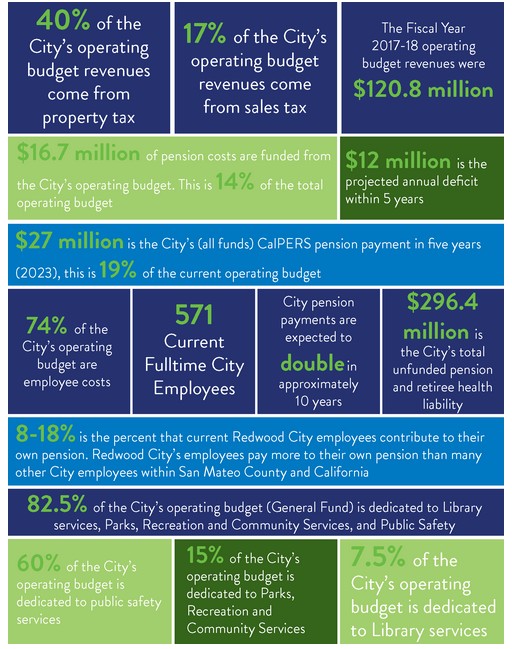