The transition to a by-district election system in Redwood City is underway.

At Monday’s council meeting, city staff mapped out an expected timeline (see below) for the move from at-large elections, which allow voters of the entire city to elect the seven councilmembers, to a district-based system, which has voters voting solely for the councilmember who resides in their particular district of the city.  Approved last month by City Council, the transition follows threats of legal action that alleges the city’s current at-large system discriminates against minorities and candidates.

The controversial effort has critics voicing concerns over their impacts to the city’s political scene. They argue district elections strip voters’ ability to weigh in on all candidates rather than just one, force councilmembers to favor their district rather than the city as a whole, and would eliminate viable candidates who happen to reside near one another. A map we’ve put together reveals a large number of council members, as well as candidates for council in the Nov. 6 election, reside near each other. 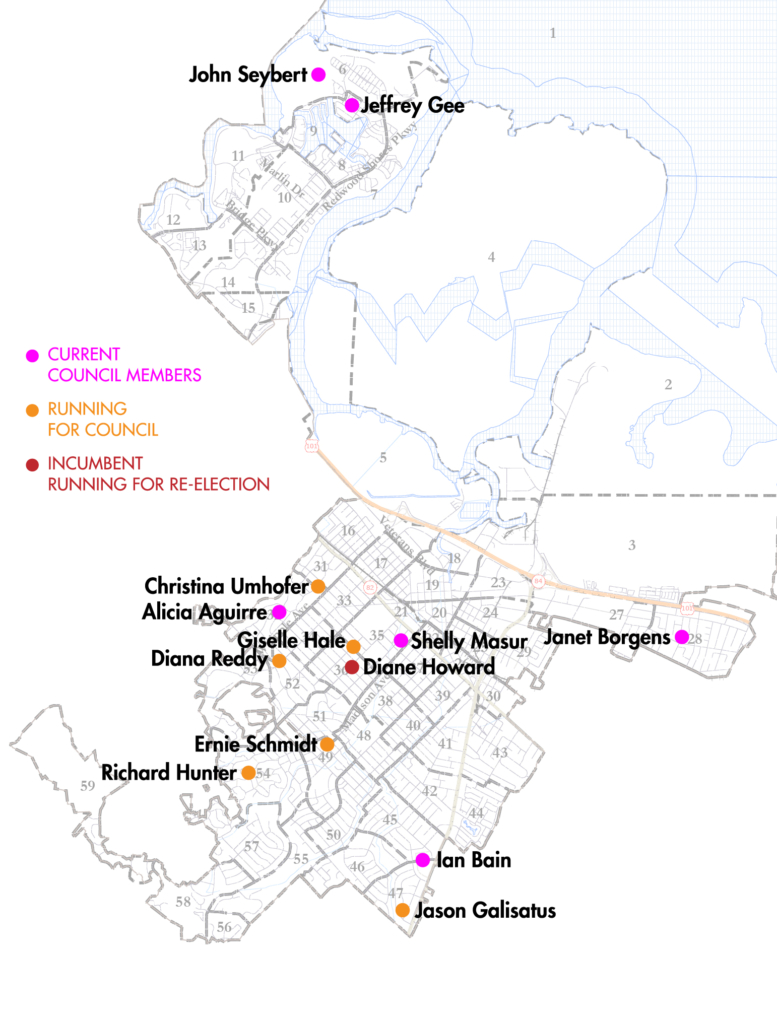 Monday’s hearing was the first of two public meetings informing the public about the general districting process and to gather input on how to draw the district boundaries. Community members who spoke during the hearing were largely not in favor of the transition.

“The hallmark of a democracy is the ability to vote for our representatives,” said Steven Howard. “After we switch to district elections there will be six people sitting in your chairs who will be making decisions for the city who we did not vote for. We will only be voting for one. We will be trading in seven votes for one.”

City Council Candidate Rick Hunter said he supports the goal of district elections, but noted the “very serious downsides” of the system.

“Every council member will represent one part, one seventh, of the city, and only one seventh of the population votes for them,” Hunter said. “That leaves the potential for parochial interests, silos, and no one representing the interest of the entire city.”

As a part of the districting process, the council is asking residents to submit their own map proposals. Mapping kits are available on the city’s website here.

September 24, 2018 The City Council adopted Resolution No. 15704 initiating the process to transition from an at-large election system to a district-based election system.

October 22, 2018 First public hearing held at the City Council meeting, at which the public was invited to provide input regarding the composition of the districts.

Throughout November and December residents are able to draft and submit district map proposals.

January 15, 2019 Three public forums will be held in different regions of the community led by the City’s demographer: Veterans Memorial Senior Center at 11:00am, Fair Oaks Community Center at 5:00pm, and Downtown Main Library at 7:00pm.

February 4, 2019 Draft Maps will be posted on the District website and available at all District public offices.

February 11, 2019 During the City Council meeting the third public hearing will be conducted, during which the public is invited to provide input regarding the content of the draft map or maps and the proposed sequence of elections.

February 18, 2019 Any revised or new maps requested at the third hearing posted on District website and available at all district sites.

February 25, 2019 The City Council will conduct the fourth public hearing, and will be requested to select a preferred map and direct amendments as necessary.

March 11, 2019- The City Council will conduct the fifth public hearing to adopt a map, election sequence, and introduce an ordinance to transition to a district-based electoral system.