Six people were displaced after three structures and an RV were damaged in a fire in North Fair Oaks Tuesday.

Just before 11:30 a.m., according to the Menlo Park Fire Protection District, multiple emergency calls were made about smoke coming from the backyard of a residential structure in the 500 block of Seventh Avenue. Responding firefighters arrived soon after to heavy fire coming from several structures to the rear of the uninvolved main house, fire officials said. Three buildings and an RV were on fire.

After determining no one was inside, firefighters took a defensive approach. A Redwood City fire engine was summoned to Sixth Avenue, the rear side, to ensure the fire didn’t spread to other structures, officials said. The fire was brought under control at 11:51 a.m. with help from 5 engines, 1 ladder truck and 2 battalion chiefs.

Investigators could not determine the cause and location of the fire due to the significant damages. The fire started 20 minutes after the property’s last occupant left the site.

A total of five adults and a child were displaced by the fire, and no one was injured. Although the Red Cross came to assist them, the individuals could not immediately be found.

County building inspectors identified “discrepancies in code compliant building standards,” fire officials said. The property was only permitted to have a smaller main home. All structures were “red tagged” and PG&E was directed to pull both the gas and electrical meters.

“Our Fire Investigators today estimated that the combined structural damage at over $100k and contents at $30k,” Fire Chief Schapelhouman said. “They will also be following up with the County on code compliance and actual permitting, which are always a potential underlying concern in North Fair Oaks. We understand and are sympathetic to the housing challenges and shortage, but potential illegal, non-permitted and compliant buildings can, and have, injured and killed residents and firefighters.” 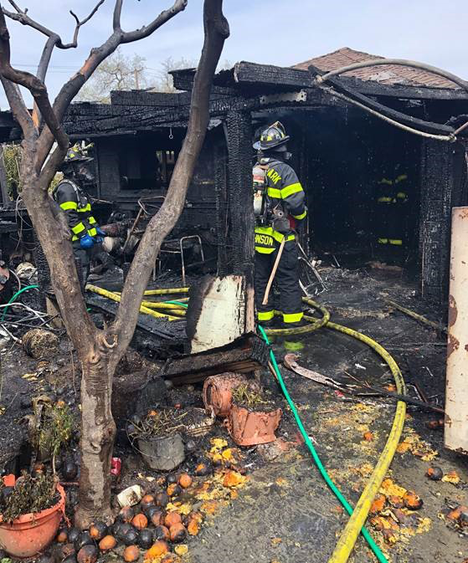