For the third time in its history, the historic Lathrop House is set to be relocated.

And the very slow methodical moving process — 1 to 2 meters per hour — begins today.

Crews are launching into the process of inching the two-story, 10-room, 1869s-era mansion from its current location at 627 Hamilton Ave. across the street to its new home outside the historic courthouse, which of course houses the San Mateo County History Museum. At a cost to the county of $1.5 million, the Lathrop House is being moved to make way for construction of a new county office building and government parking structure, according to the county.

The move is expected to last until Sunday, possibly into Monday. In preparation, the 90-ton house was lifted five feet in recent weeks so that beams could be inserted underneath.

“The house will be hydraulically pushed on industrial rollers to its new home where it will be re-established on a new, seismically stable foundation and connected to existing utilities at the History Museum,” the county said in a statement. 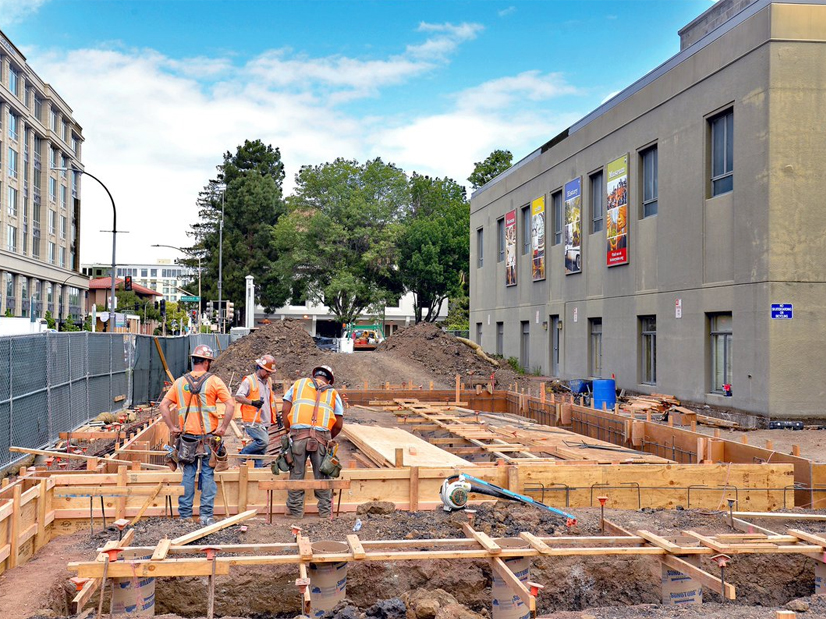 Today, crews will very slowly begin moving the house to the edge of the block bordered by Marshall Street, a project set to last until Friday. Construction will pause Saturday, and crews are targeting Sunday for the final push across Marshall, which will be closed to traffic.

The Lathrop House is one of the oldest mansions in the Peninsula and is listed on the National Register of Historic Places.

In January 1858, Mary C. Lathrop bought the entire block of lots, including the site where the Fox Theater building stands, from the Arguello and Mezes families, according to the county. The Lathrop House was ready to be occupied in 1863, and was seven years later purchased by General Patrick Edward Connor, whose family kept hold of it until 1894. That’s when Redwood City public school trustees purchased it and moved it to the rear of the block to make room for a grammar school. In 1905, the wife of Sheriff Joel Mansfield bought the home and it was moved to the present Hamilton Street location, according to the county.

“The Lathrop House is a jewel of San Mateo County’s history and will be a wonderful addition in its new location where hopefully even more people can visit,” San Mateo County Board of Supervisors President Carole Groom said in a statement. “Moving the house just down the block lets us remain connected to our past while making way for our future office space.”

How big is Lathrop House?

How much does the house weigh?

How did crews lift the house and how long did it take?

Crews placed the house on top of 35, 45, 50 and 80-foot beams using hydraulic lifts and lifted it 5 feet above ground which is the optimal height to move the house to its desired location. This process lasted approximately two weeks and required much coordination and manpower to transport such long beams in the crowded downtown Redwood City area.

How exactly will the house be moved?

The house will be hydraulically pushed on top of industrial rollers. These rollers will be placed on top of the traveling beams which will span across the parking lot from Wednesday, May 8 through Friday, May 10 and across Marshall Street Sunday, May 12 and, if needed, Monday, May 13.

At what speed will the house move?

The rate of speed will be about 1 to 2 meters per hour. To accommodate the slow process, the County allocated five days for the total move.

Are special precautions needed to protect the house during the move?

Yes. Crews are taping and bracing some of the windows and walls that might be strained or damaged during the move. Also, all furniture inside the Lathrop House was removed and stored in three 20-foot containers to protect objects and items from falling and damaging the integrity of the house.

Will there be any changes to the house in its new location?

The interior of the house and its utilities (water, electricity, bathrooms) will be identical as it was before with the exception of the kitchen which will be decommissioned. The Gift Shop area will be combined with the office room next door to allow more space for gifts and souvenirs.

What work was needed to prepare the new site?

Photos courtesy of the County