After a controversial six-month process, the Redwood City Council adopted a map that will change how residents elect councilmembers.

And this time, the council’s decision hasn’t led to a protest.

Under the threat of legal action, Redwood City is transitioning from an at-large election system, where residents vote for all seven council members, to a district-based election system, where they vote only for council candidates running in their district. Hundreds of California jurisdictions have been forced to make this transition under the legal claim that at-large systems violate the California Voting Rights Act of 2002 by discriminating against minorities and minority candidates.

But the process to divide the city into seven districts has been divisive on the council and in the community. After its seventh public hearing on the issue on Monday, City Council approved by a 6-1 vote a revised version of district map 13h crafted by the city’s demographer. City staff says the map complies with federal and state laws and best addresses community concerns.

The decision came down to three maps: 13h, 21f and 13g, all of which included two minority-majority districts, which is in the spirit of the Voting Rights Act. A majority of councilmembers expressed support for maps 13h and 21f, as they allowed Redwood Shores, where community members have historically felt lacking of a voice at City Hall, to have its own independent district. Six councilmember voted in favor of 13h, with only Councilmember Alicia Aguirre, who preferred 21f, voting no.

Councilmember Diana Reddy expressed opposition to having Redwood Shores as an independent district, wanting it to be combined with Bair Island.

That opinion wasn’t shared by a large contingent of Redwood Shores community members who advocated for their own district. Councilmember Borgens said she would have supported combining Redwood Shores and Bair Island if it made Redwood Shores residents feel included at City Hall. But in her discussions with residents, she said it became apparent an independent district was the most inclusive approach (story continues below map). 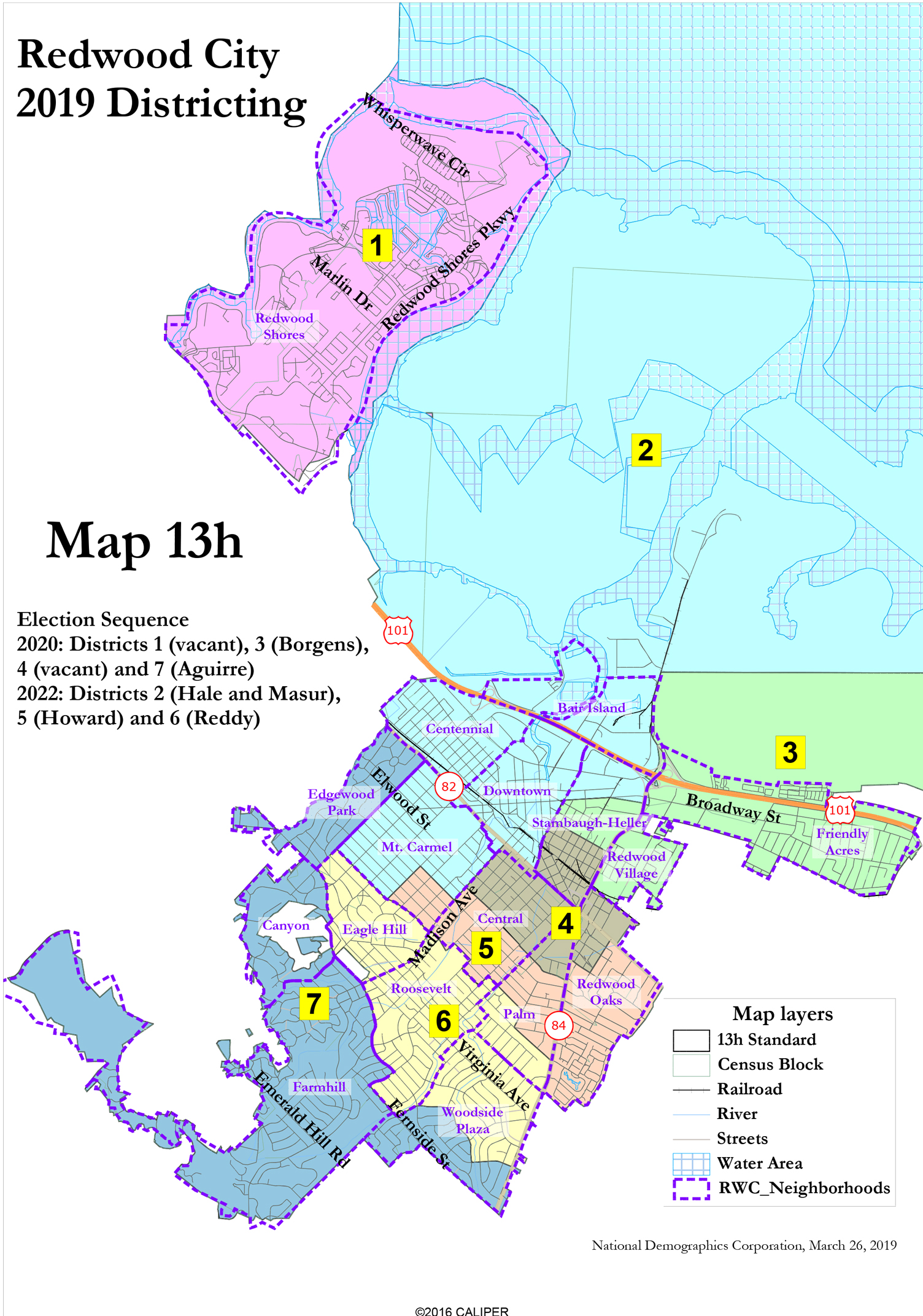 “I will not support 13g because it doesn’t do what you are requesting loudly and clearly,” she said.

In an effort to avoid future controversy, a citizen’s advisory group is being considered to help develop the next map, Vice Mayor Diane Howard said.

“Considering what little time we had and the importance of making sure the whole community had a voice, I’m glad we did it this way this particular time, and I think we all learned a lot,” Howard said.

A second reading of the ordinance is scheduled for May 20, which is 10 days before the deadline for the city to transition to district elections.

For more details, go to www.redwoodcity.org/districtelections.

By Dan Brown One of the perks of being an age-group warrior,
By Susan Jenkins I lived in China for 15 amazing years, falling
Local residents can get the scoop on the latest in estate planning
Plans are taking shape for transforming a small parking lot next to
The motto is simple: Everybody deserves to play baseball. The San Francisco
Go to Top