A bust at a Redwood City motel Wednesday led to the seizure of an “enormous amount of property” belonging to residents throughout the Peninsula, as well as the arrest of two suspects, according to the San Mate County Sheriff’s Office.

Kirk Vernell Moore, 51, of East Palo Alto, and Veronica Machado, 28, of Daly City, were arrested on felony and misdemeanor charges including mail and identity theft following a bust at the Garden Motel, 1690 Broadway St., at about 4 p.m., the sheriff’s office reported.

While investigating a petty theft case in San Carlos on Wednesday, detectives learned the suspects were staying at the Garden Motel. The detectives went to the hotel and contacted Moore and Machado at a room they rented, and during that encounter they reported locating a credit card skimmer used to make fraudulent credit cards, numerous pieces of stolen mail, checks, and property from victims in the Emerald Lakes area of San Carlos and other Peninsula areas. A replica firearm that was illegally colored to look like a real firearm was also uncovered, the detectives said.

“Due to the enormous amount of property seized, the investigation is still ongoing and the victims will be contacted as the case progresses,” the sheriff’s office said.

Anyone with information on this case or the suspects is asked to contact Detective Dan Chiu 650-363-4057 or dchiu@smcgov.org or Detective Scott Benitez 650-363-4067 / sbenitez@smcgov.org. 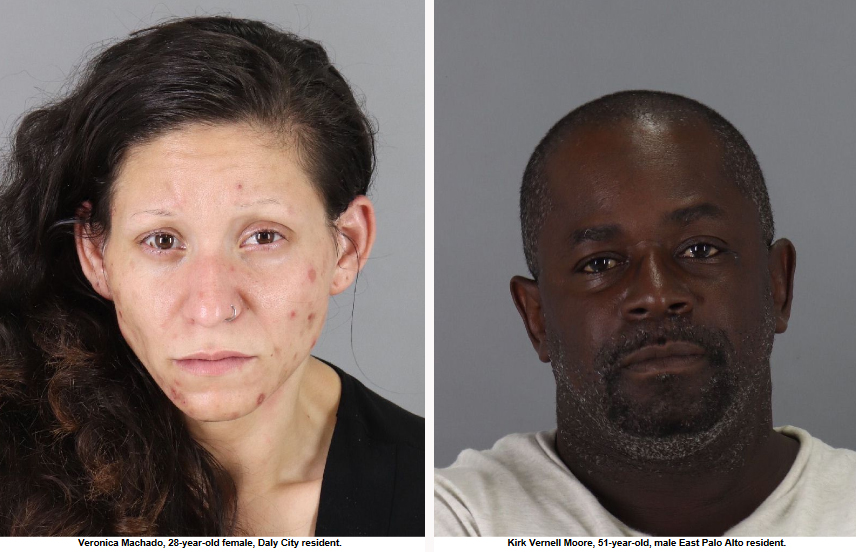