On Monday, a simultaneous review of nine housing and commercial projects in the downtown Redwood City area is set to begin, in a process that’s been used elsewhere but will be a first for the city.

Over the next few months, the City Council of Redwood City will hold three meetings, including two study sessions, to review the nine proposals for housing, commercial and mixed-use projects.

Monday’s first public hearing will include developer presentations for four housing projects (summaries of each are listed at the bottom of this story).  The remaining five proposals, predominantly commercial or mixed-use projects, are scheduled to be presented at City Council on Sept. 21.

The council will not take action on any of the projects until a third meeting, likely to be held in October. Any project enabled to move forward would require additional public vetting and environmental review, according to the city.

The simultaneous review is part of a newly introduced Gatekeeper process to the city. It’s connected to a broader city strategy to re-envision the downtown area as a transit-oriented center with a focus on housing, especially affordable housing, transportation and safe and healthy environments for children and youth, according to the city.

What all nine Gatekeeper projects have in common is they would all require amendments to the city’s General Plan and/or the Downtown Precise Plan, both of which were adopted roughly 10 years ago. Since their adoption, a booming regional economy skyrocketed the demand for housing and transportation solutions, but downtown growth is limited under the current plans.

In November last year, Council directed city staff to develop a plan for a long-range community visioning process for Central Redwood City. It also launched the Gatekeeper process to determine whether to proceed with any current projects requesting General Plan amendments. The aim of the process is to prevent delay to projects that could benefit the city and that meet the city’s vision for the future, as determined in a strategic plan adopted by council in January. Housing, transportation and children and youth are priorities in the strategic plan. Gatekeeper projects can proceed in advance or concurrently with the visioning process, the city said.

“We acknowledge that this is the first opportunity for the public and the community to begin to weigh in on the projects themselves,” said Muenzer, adding there will be “many more” opportunities for the public to provide comment and input on each proposal that moves forward.

(Note, project at 1322 El Camino Real was formally withdrawn from the Gatekeeper process) 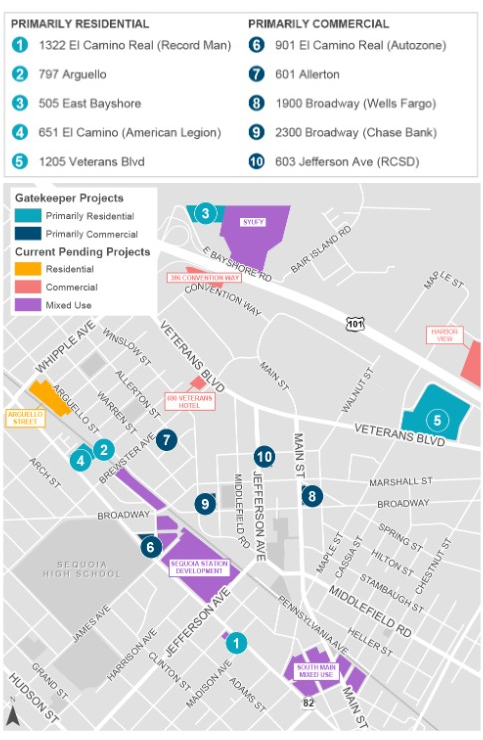