A crowd of parents, students and teachers rallied outside the Sequoia Union High School District administrative offices Tuesday afternoon to press for stronger action on reopening schools closed nearly a year ago in response to the worldwide coronavirus outbreak.

About 150 people—many carrying signs and most wearing red—brought their appeal to the district office’s front steps the same day the state announced that San Mateo County was moving today to California’s more relaxed “red” tier. Decisions on public school operations are made by local school boards, in consultation with the county Office of Education.

Parent Sateez Kadivar, one of the organizers of the rally, told the crowd that it has been “346 days without school. Enough is enough … We have freshmen who have never set foot on campus. We have seniors who are running the risk of having their high school careers cut short in the middle of their junior year. That’s why we’re here today.”

Shannon Chi is the mother of a Sequoia High School student. She contends that schools elsewhere have successfully reopened, with masking and social distancing protocols, but the Sequoia district hasn’t put forward a tangible plan with a target opening date. She and others voiced the fear that if opening doesn’t happen in the spring, fall could be in jeopardy too.

“Covid is not this mysterious thing anymore,” Chi said. “We’ve had a year to learn how to open and operate and we have numerous health authorities and examples by other school districts in our own neighborhood and across the nation that have opened successfully. And so I think we can do it.”

The district’s plan for reopening, which was submitted to the county in December, is posted on its website (seq.org). Among several still-outstanding items are ventilation upgrades, completion of labor agreements and employee accommodation issues.

School Board President Alan Sarver was at the rally to observe and said he appreciated both the speakers’ tone and content. The district is transitioning out of a dramatically worse period in terms of community danger, to what appears a more predictable phase, Sarver said. “This organization of community voice is very helpful in putting more information and more perspective on the table.” 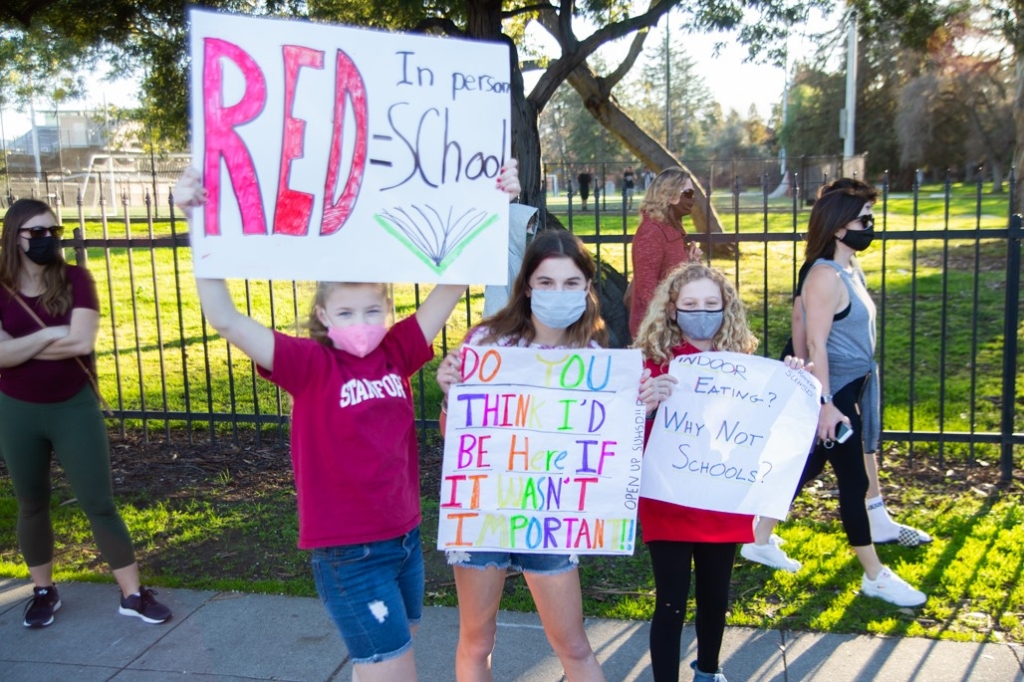 Menlo Atherton freshman Aaron Becker, who was at the rally, displayed a hand-painted sign. “I’m here today because I want to go back to school,” he said, adding that he hasn’t been on campus yet and also wants to play football.

“We’re here to show our support for getting the kids back into the classroom,” said Carol Donnelly of San Carlos, whose two daughters attend Sequoia High School. It’s been a challenging year for the sophomores who have been stuck in their rooms to attend class and are missing out on social activities. “But the most important thing is not getting an education,” she said.

Ann Crady Weiss, who has two children at Menlo Atherton High School, has been active with the organization that began less than a month ago to advocate for reopening. Already,  “Reopen SUHSD” has more than 2,000 supporters. Its website, reopensuhsd.com, helped mobilize the troops for the rally; and includes an advisory about the next school board meeting (at 6 p.m. Wednesday).

“The school board, I think, thought this was a few isolated parents, but this is more than 2,000 from across the district,” she said. “We have representation from every school and increasing every week.”

Crady Weiss stressed that individual teachers during the last year have been wonderful and gone above and beyond the call in helping the kids. “But I don’t see the can-do spirit that I believe would be most helpful for our kids from the teachers union leadership, which is really too bad.”

The psychological problems kids are experiencing, Crady Weiss added—depression, eating disorders to name two—are much more significant than potential transmission of the virus. “There is just zero question in my mind about where the seesaw is to be balanced here.”

Menlo Atherton parent and Athletic Director Steve Kryger was among the speakers and expressed appreciation for the group’s “respectful” attitude about teachers and staff with medical issues and “aren’t going to force them to go back.”

That said, a sizeable number of MA teachers he knows “are willing to be back in (the) red (tier).” Though there are risks, “I think for me personally … the risk is well worth the benefit that the whole community gets.”

Another speaker, Caroline Krauskopf, is a Stanford University-educated epidemiologist who has been doing support work at Woodside High School. The administration has done an amazing job and has more than 85 classrooms ready to take 12 students each, she said. “We are ready willing and able to host at least 900 students a day.”

Krauskopf said her work on campus makes her realize that “all our students need to be back on campus.”

At the end of the rally at the district office, the group marched to the gates of Sequoia High School on El Camino Real at Broadway, where passing drivers honked and waved.

The Peninsula community is coming together to support a Redwood City family
Ray Iverson, currently fire chief for the San Mateo Consolidated Fire Department,
Just in time for Pride Month in June, the San Mateo County
Boys and Girls Clubs of the Peninsula (BGCP) and virtual nonprofit Pandemic
A 58-year-old woman was arrested on arson charges in connection to a
Go to Top