Meet Lord Pheatherington, a Golden Pheasant who is available for adoption at Peninsula Humane Society & SPCA.

The adult male Golden Pheasant was found as a stray in San Mateo. A Good Samaritan reported him after noticing he was injured and unable to fly in her front yard. The PHS/SPCA rescue staff came and safely netted him and brought him to their shelter on April 13.

“A Golden Pheasant is an extremely rare animal for our shelter, and it’s actually quite exciting to have such a beautiful bird available for adoption,” said PHS/SPCA Communications Manager Buffy Martin Tarbox. “His name, Lord Pheatherington, is inspired by the popular show Bridgerton. He’s certainly good looking enough to be a main character on the series.”

When he arrived at the shelter, Lord Pheatherington was “missing most of his tail feathers and several of his primary wing feathers were broken, rendering him unable to fly,” according to Tarbox.

“Based on his injuries, we believe he may have been attacked by another animal but escaped. He’s a very lucky pheasant,” she said.

No one came forward to claim the bird, so PHS/SPCA have made him available for adoption.

His exact age is unknown and his feathers will grow back in a few weeks’ time.

“Lord Pheatherington is quite social and has especially enjoyed the company of some female chickens he’s been temporary housed with at our shelter,” said Tarbox. “His ideal new home would include an outdoor predator proof, fully covered enclosure and another Golden Pheasant flock, or even a group of female chickens. We are committed to securing him in a home where he will be kept as a pet, not a source of food.” 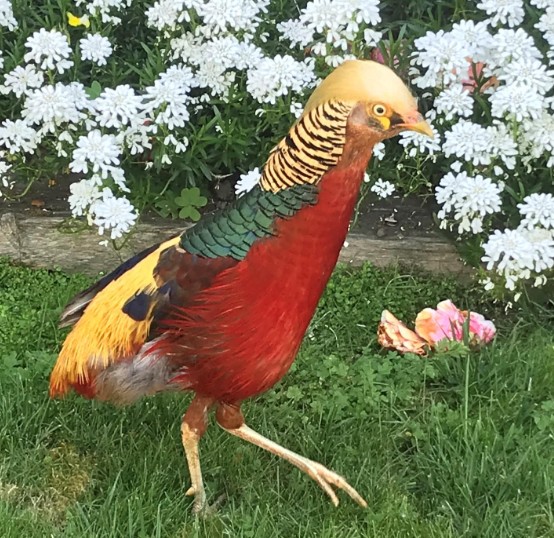 By Susan Jenkins Every Thanksgiving, my family traveled to my grandparents’ small
Every year, retired newspaperman Bill Shilstone tells himself the same thing. “I
Planning Commissioner Chris Sturken has won the Redwood City Council District 2
Hillsdale Shopping Center kicked off the holiday season with its annual tree
Commercial Dungeness crab fishing season is delayed in California, with too-low crab
Go to Top