Mark Sanders had impressive and wide-ranging credentials on his résumé before he added the one that proved his biggest test: He’d been a Naval officer, an engineer, a sailor, a rancher, and corporate leader—not to mention the winner of nine EMMYs for technical innovation—before he decided to build a marina in Redwood City.  Without a doubt, though, building Westpoint Harbor has been the most challenging undertaking in his very eventful career.

From concept to construction, the harbor located near Pacific Shores Center took more than 14 years to plan, engineer, design and, most importantly, to earn permits from 12 separate federal, state, regional, and local government agencies. Sanders calls the marina “a labor of love” and it’s thanks to his vision and determination that Redwood City boasts today one of the finest recreational harbors in North America — with a hotel and additional shoreside amenities yet to come.

Though building Westpoint Harbor has been Sanders’ greatest challenge, he’d never been shy about taking them on. The former high-tech CEO spent 20 years in increasingly responsible management roles at the iconic tech giant, Ampex, before taking the helm of Pinnacle Systems, a foundering 21-person start-up in 1990.  When he retired from Pinnacle in 2004 it was a 1,700 -employee industry leader in digital video technology with sales of $350 million.

Today, though ostensibly retired, the passionate sailor is the owner of a marina that realized his personal goal — incorporating state-of-the-art environmental safeguards, premier amenities, and boat-centric innovations. Sanders’ vision and success were validated by the boating industry in 2019 when Westpoint Harbor received the Large Marina of the Year Award from Marina Dock Age magazine. More recently, the harbor was recognized with the Marine Industries Association “Gold Anchor Award” – the first in the country.

“One thing I often say about Mark, and I mean this in the best possible terms, is that he is unencumbered by those impermeable barriers that others see,” marvels longtime sailing buddy Bob Wilson, a Redwood Shores resident who first met Sanders when both worked at Ampex in the early 1980s, then followed him to Pinnacle. “He allows himself to dream big, and to see what’s possible and to remove the roadblocks that are before him.”

How Sanders became the first new harbor owner in the bay for decades is a saga that began in 1988.  A lifelong sailor (he grew up in a boating family in San Diego), he was distressed to see marinas and boatyards close in the South Bay. He resolved to reverse the decline of his favorite pastime in his adopted home of Redwood City.

“Recreational boating was fading in the South Bay because high land values made other uses more lucrative,” he recalled. “The high cost of maintenance dredging, lack of suitable sites and a difficult legislative environment added to the problem.”

Studying maps, he located the only suitable piece of shoreline left in the South Bay that offered deep-water access — where Westpoint Slough meets the bay — and purchased a 50-acre bittern pond that had been part of Cargill’s 1,400-acre solar salt-making plant site in Redwood City.   (Bittern is concentrated sea water with most of the NaCl removed – and the source of industrial products used for dust control in vineyards and de-icing on roads and bridges.) That was in 1990.

Despite having no formal opposition to the harbor, and the backing of local officials, environmentalists, and the business community; the regulatory and permitting process nearly buried him. It wasn’t until 2003 that construction began and the first boats entered the harbor in 2008.  “It’s said waterfront development on San Francisco Bay is second only to the nuclear power industry in difficulty, and I believe that is true,” mused Sanders, of his 33-year undertaking. 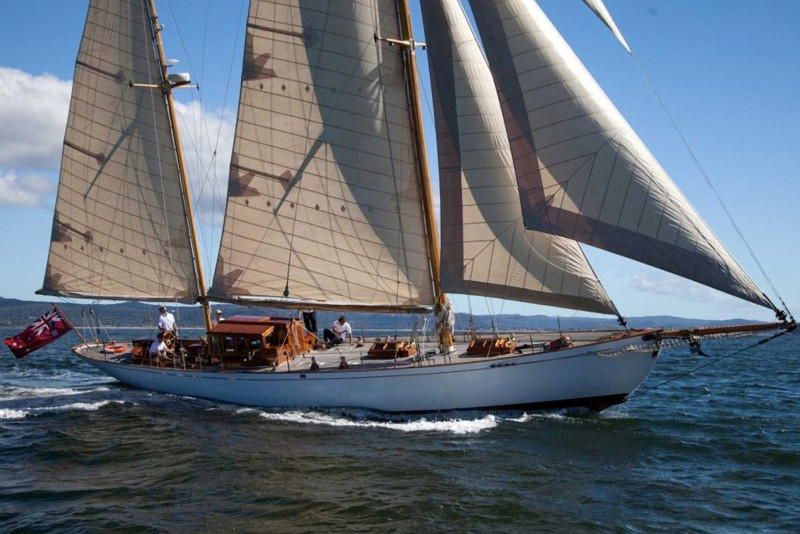 Westpoint Harbor provides 416 slips for boats from 36 to 120 feet in length.  Superyachts, some belonging to Silicon Valley’s tech titans, dock at Westpoint Harbor, along with an array of smaller craft.  All berths have slip-side pump-out stations for sewage (a first in California) and Wi-fi, two amenities that keep the marina’s waters cleaner than the bay and 21st century boaters connected 24/7.

The marina accommodates a diversity of boaters and boating lifestyles, from liveaboards to visitors from around the world — thanks to a 1,000-foot guest dock, a fuel dock, public boat launch and a kayak beach. The harbor also accommodates dinghies, kayaks, paddleboards, and other personal watercraft.  Demographically, Sanders is proud to say, his harbor users nearly match San Mateo County’s profile.

When Sanders embarked upon his marina project, he studied all he could about the field. He quickly became a recognized expert and was elected president of the Marine Recreation Association, champions of West Coast boating.

“Mark is one of these people who looks beyond the immediate and looks over the horizon. He builds relationships. He’s not a single dimensional person,” says Wilson. “He’s just a solid citizen with the highest integrity.” Wilson recalls that as Pinnacle’s CEO, Sanders — like every other employee — worked out of a cubicle and flew coach.  “He treats people so fairly, and as an employee you recognize you are going to get a chance to perform and to make a mistake.”

“He is a visionary… and has the ability to bring a vision to life,” agrees Paulien Ruijssenaars, who, like Wilson, is a former colleague of Sanders’ at Pinnacle and an enthusiastic boater.  “And then to bring people together to help him execute.  He did it at Pinnacle. He did it at the harbor. That’s what he does,” she says.

Nevertheless, Sanders’ project managed to end up in rough waters with the San Francisco Bay Conservation and Development Commission, a government agency formed to prevent bay fill and regulate a 100-foot shoreline band around the bay.  Within the first five years of construction and operation, BCDC had lodged nearly 100 charges against the marina. Daily fines were racking up.  Virtually all were “paper violations,” in Sanders’ view.  Among them:  allowing Redwood City’s fire and police boats to moor inside his harbor and posting boating speed limit signs that faced the water instead of the shore.  Sanders was at an impasse and litigation loomed.

This imbroglio prompted Ruijssenaars, a public relations professional, to start an independent support group, “Friends of Westpoint Harbor,” and rally 5,000 Bay Area residents to the cause.  “A lot of people got involved, says Ruijssenaars.  “Number one, because they trusted Mark, and number two, because they believed in what he was doing.”

Pivotal among them, in Ruijssenaars view, was San Mateo County Supervisor Dave Pine, who represents the county on the 27-member BCDC. “It was because of Mark’s network and because Dave was an honest broker, we could bring the sides together and resolve the issues.”

Pine says he “was inspired to help Mark work through a number of long-standing regulatory issues because I was impressed by his vision of creating a world-class, environmentally friendly marina in Redwood City.  Westpoint Harbor is a very special place and is a testament to Mark’s love of the Bay.  The perseverance, tenacity and innovation Mark displayed in creating the marina is truly remarkable.”

Sanders is everlastingly grateful.  “Dave Pine took the time to visit Westpoint Harbor and had the courage to stand up at a commission meeting in which staff proposed a cease-and-desist order against Westpoint Harbor.”

Ultimately, the issues were resolved in 2018.  BCDC dropped its claims and has it been smooth sailing ever since.  In return, Sanders halted legal action and made donations of $75,000 to Marine Science Institute, and $75,000 to the California Coastal Conservancy.

Sanders felt some vindication when State Assemblyman Kevin Mullin and then-State Senator Jerry Hill, both Democrats, formed a legislative oversight committee which ordered an audit of BCDC’s enforcement program.  In a politely-worded but scathing report, the State Auditor found BCDC was failing in its mission to protect the bay and recommended many steps for improvement. Following the audit, the BCDC Executive Director Larry Goldzband issued a conciliatory statement, admitting: “Commission and its staff publicly agreed with most of the report’s recommendations and the Commission directed staff to use those recommendations as a springboard to improve the enforcement program.”

One of the most interesting aspects of Westpoint Harbor’s development is how the site – with its 40-foot-deep saturated bay muds — was drained and reshaped into a 26-acre, water-filled basin surrounded by 24-acres of buildable uplands. And in record time.

Unlike most marinas, Westpoint Harbor didn’t start out as a navigable part of the San Francisco estuary.  Rather, the property existed as a soggy marsh for several thousand years, and was then used in salt production for about a century. Geotechnical engineers predicted it would take 35 to 40 years to prepare the site for excavation and compaction using natural processes.

An Idea from Holland

Obviously, a no go.  Instead, Sanders applied an innovative “wicking” process to “dewater” the site—something he learned on a business trip to Holland, where half the land has been reclaimed from the sea.  The process required the placement of 50,000 flattened 40-foot-long tubes (wicks) in the watery muds.  The site was then “surcharged,” with excavated mud piled on the wicked area—forcing the liquid up the wicks so it could be drained and pumped back into Cargill’s salt production process.

Dewatering the 50 acres took less than a year.  Massive excavators then dug out the marina basin and the excavated muds were compacted into developable uplands – a process that took another four years.

Even from boyhood, Sanders has been on a fast track. At age 10, he was already a ham radio operator with his own station.  Throughout middle and high school, he worked as an electronics assembler, then a technician and junior engineer at Lockheed and McDonnell Douglas. While studying for an engineering degree at Cal-Poly, he was a radio and TV serviceman.  After a stint in the Navy aboard destroyers, he entered the corporate world at Ampex.  He was promoted to increasingly responsible positions, inspiring him to earn an MBA at Golden Gate University to better meet his ultimate role as Vice-President and General Manager of the Recording Systems Division, the company’s largest.

The Harbor’s Next Phases

Sanders’ vision for Westpoint remains incomplete. He is now overseeing construction of the third and final phase of the harbor, which includes a boutique hotel, restaurant, shops and other shoreside amenities that will provide attractions for boater and boat watchers.

A father of two and grandfather of two, Sanders and his wife Maureen (a retired speech and language pathologist) run cattle and grow organic produce at their ranch in San Gregorio. Yet he still finds time to indulge his special passion of cresting the waves aboard Hurrica V, his 72-foot Charles Nicholson ketch which is berthed at the marina. Built in Australia in 1924 and used as a patrol vessel for the Australian Navy in WWII, Hurrica V was featured in “The Great Gatsby” movie starring Leonardo di Caprio.

Looking back, as he sums up his commitment to Westpoint Harbor, Sanders sounds both weary and proud.

“Phase 1 and Phase 2 was all construction and all about boaters.  Phase 3, which will begin to open next spring, includes a 1000-foot boardwalk with shops, a restaurant and a yacht club – and will be for everyone.  We are creating a place where everyone can come down and have a meal or eat some ice cream or have a cup of coffee and enjoy the water.  It’s the final bloom of this project.”

Jill Singleton is a retired public relations representative of Cargill.