As Memorial Day fades into the past, I was saddened to see there was no remembrance and no memorial to the seven servicemen who perished when a large Navy transport plane crashed into the hills of San Carlos during World War II. The transport, carrying a crew of three and 20 passengers, was en route from San Pedro in Southern California to Oakland on the night of March 14, 1945.

That evening there was a rainstorm with clouds reported as low as 1,000 feet and visibility of only three miles. As the Douglas R4D transport (similar to the commercial DC-3 airliner) flew north toward Oakland, the weather closed in and the cloud ceilings dropped to 500 feet, but this updated information was not passed to the pilots. Unsuccessful at landing during their first attempt at Oakland, the pilots chose to go around and try again. They followed the “missed-approach” procedure for the airport, but seem to have gotten lost in the clouds above the bay.

At 8:12 p.m., the Navy transport impacted the San Carlos hills at an altitude of 630 feet. Of the 23 on board, the three-member crew were killed along with four servicemen sitting in the forward passenger cabin while the remaining 16 passengers survived with various degrees of injury.

Worst Accident Until Then

At the time, the Navy transport crash was the worst aviation accident in San Mateo County. Eight years later, the Navy transport’s grim record was eclipsed by the tragic Oct. 29, 1953, crash of the British Commonwealth Pacific Airlines Douglas DC-6, named “Resolution,” which claimed the lives of eight crewmembers and 11 passengers. The most famous of Resolution’s passengers was American pianist William Kapell, who was returning from a concert tour in Australia.

Having located Resolution’s crash site in the early 1990s, I became interested in finding the crash site of the Navy R4D. Little did I know it would take more than a decade of searching.

From the newspaper accounts of the time, I learned that Charles L. Gracy, a guard at the property that had been the San Carlos War Dog Training Center, heard the transport fly over, very low, followed by the terrific sound of the aircraft impacting the hill. Gracy phoned the San Carlos police. Chief Edward J. Wheeler and patrolman Russell Rodgers responded to the scene. Soon after, 16 ambulances arrived to take the injured to San Mateo General Hospital and Dibble Army Hospital in Menlo Park. 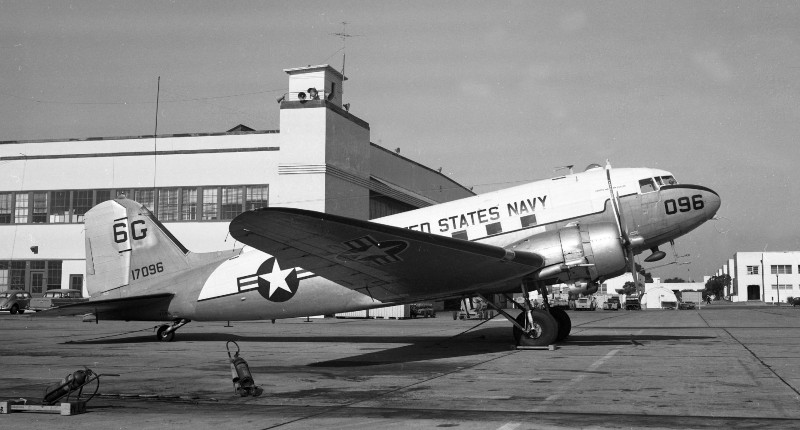 I asked around town as to the location of the Dog Training Center, but, at the time, no one could pinpoint the base. I later learned that the center was on the former H&H Ranch property and was adjacent to the Devonshire Country Club’s clubhouse at the top of Club Drive.

During the war, more than 2,500 military dog handlers trained 4,500 dogs at the facility— so it was no small place. From the Navy crash report for R4D-5 Bureau of Aeronautics serial number 17228, I learned that the plane impacted the hills 630 feet above sea level.

Having established a search area, I began the systematic search of the east-facing canyons along San Carlos hills. Up canyons and down canyons, through the brush, but never any luck. I needed more information to solve this puzzle. I knew I was not looking for large sections of aircraft because the March 19, 1945, edition of the San Mateo Times reported that the aircraft wreckage was hauled down Club Drive and over to the Alameda Naval Air Station for investigation and ultimately, disposal.

Eventually a number of photos of the crash were posted for sale on eBay. Unfortunately, I was not the winning bidder. Luckily, I was able to arrange to purchase copies from the new owner. These images were the key to finding the crash site. Armed with the photos, my friends and I began lining up the hills with those in the photos. To everyone’s surprise, the wreck site was determined to be on public land in the 16-acre Big Canyon Park.

The park is bordered by Brittan Avenue and by Crestview and Melendy Drives. The best entry point to the crash site is Tank Trail off of Crestview Drive, which happens to be approximately 630 feet above sea level. From high up in the park, the wartime crash photos line up with the hills along the eastern rim of the canyon. After reviewing the photos and comparing the size of the wreckage, it was also determined that the street that later became Regent Court was cut with a dozer to give the Navy access to remove the wreckage.

A group of friends gathered early one Saturday morning to scour the canyon for the wreck site. Neighbors along Regent Court were most courteous as we covered the area of the park bordering their homes. Apparently during the 1960s, when homes were built in the area and before the canyon became a park, it was an accepted practice for neighbors to dump their trash in the canyon. This refuse buried debris and frustrated our attempts to find the R4D’s final resting place. We covered a lot of ground but our first expedition was unsuccessful.

Jeff Christner and his son Paxton returned a few weeks later and were able to locate pieces of the transport. In subsequent months, others have returned to the site to pay their respects to the lost servicemen.

For me, it was a mystery solved, and an historic aircraft crash site was found and recorded. I would be remiss had I not gone searching for such a site only 1.3 miles from my home. Certainly not the easiest aircraft to find, but one that needed to be accounted for.

I’m a member of a community unique in aviation history research known as “Wreckchasers” or “Aviation Archaeologists.” We seek out these sites to document them for posterity and honor the memory of those lost in the accident. The work we do to record parts for patterns may also help keep other historic, flying vintage aircraft. A quick search of Amazon will bring up a number of Wreckchasing books covering most of the western United States.

Although there is little of the Navy transport plane’s wreckage to see in Big Canyon Park, I hope this brief remembrance will motivate some civic group to place an interpretive plaque at the park’s entrance in memory of the seven U.S. servicemen lost during World War II within the city limits.

Nicholas A. Veronico is the author of more than 40 books on military, transportation, art and local history subjects, including “Hidden Warbirds: The Epic Stories of Finding, Recovering and Rebuilding WWII’s Lost Aircraft.”