Redwood City’s Union Cemetery hasn’t seen a Memorial Day ceremony for two years.  Today’s news filled with stories about America’s reckoning with a legacy that included slavery makes this event more relevant than ever. Perhaps it is time for Americans to remind themselves of the bloody sacrifice needed to take the shackles off men, women and children. Union Cemetery does that.

Covid restrictions limited this year’s Memorial Day event to the placing of flags on graves, in sharp contrast to traditional ceremonies that included guest speakers, music and the firing of the anvil. That dramatic finale to the event involves an explosive charge, which is set off under an anvil that goes flying into the air, sometimes setting off alarms on cars parked on adjacent Woodside Road. 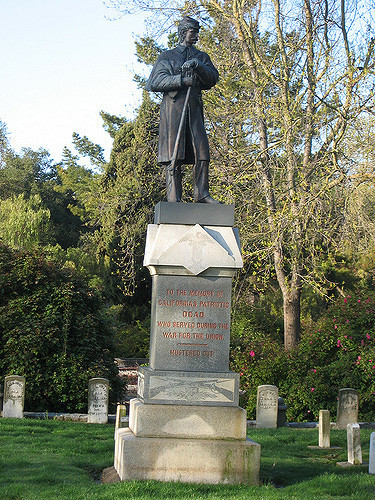 Memorial Day, the May holiday formerly called Decoration Day, once drew thousands to cemeteries across the nation to pay their respects at the graves of Civil War veterans. Union Cemetery is a grim reminder of that cataclysmic struggle. The eastern end of the cemetery features a Grand Army of the Republic plot that has 46 headstones atop the graves of Union army veterans, their final resting place guarded by a statue of a Union soldier. It is fitting to recall President Lincoln’s Gettysburg Address and its line about “the brave men, living and dead” who “consecrated” the Gettysburg battlefield “far above our poor power to add or detract.”

The “brave men” President Lincoln immortalized in his famous speech included James Henry Baxter who was wounded in the neck with a sword at Gettysburg. His tombstone was the last to be erected at the GAR plot. The tombstone was placed in 1984 even though Baxter died in Redwood City in 1936 at the age of 92 and was buried at the foot of the Union soldier statue. His resting place was unmarked until relatives had the stone marker placed on his grave.

Men who fought in units from several states are buried in the Redwood City cemetery. Missouri, Ohio, Maryland, Illinois and New York are among the states represented. The remains in the plot include those of George Filkins, a lieutenant who fought at Missionary Ridge, Nashville and Stone River; and Lt. William Frisbie, who served with the 19th infantry of the Wisconsin Volunteers at such bloody battles as York River, Suffolk and James River.

For years after the Civil War, veterans’ groups failed to hold ceremonies at Union Cemetery because no one was buried there who served in what was then called “the War for the Union.” By 1887 there were six veterans’ graves to decorate with flowers. The increase led the GAR, composed of Civil War Union Army veterans, to buy the land for the present plot.

According to newspaper accounts, former Civil War soldiers first took part in Decoration Day services at the cemetery in 1886. It didn’t take long for this practice to become a tradition. By 1927 hundreds attended observances that included marching bands. In that year, four Civil War veterans “rode in machines” during a parade “and occupied seats on the platform,” according to newspaper reports. The San Mateo County Times & Gazette’s coverage of the 1890 Decoration Day ceremonies reported  a procession of patriotic citizens marched from Broadway (then called Bridge Street) and Main to the cemetery where the statue of the soldier was decorated  with garlands of evergreens and roses.

The statue, which over the years would be vandalized several times, was erected in 1889 and includes these words: “To the members of California’s patriotic dead who served during the War for the Union.” Near the base are the words “mustered out,” a military term meaning discharged.

In 1969 vandals toppled the statue, leaving it in pieces scattered on the ground. During the next 30 years, volunteers wearing Civil War uniforms would often mount the pedestal, standing in for the missing statue.  Eventually, a public fund drive raised $30,000 for a replica replacement which was erected in 1999.   There’s some irony connected to the statue: The replica sculptor was the president of the Redwood City chapter of the United Daughters of the Confederacy.