About 100 people recently marched down El Camino Real to a rally at San Mateo’s Central Park to raise awareness about carbon fee and dividend legislation.

Held Saturday, Aug. 21, the “Students for a Carbon Fee & Dividend Rally” was organized by about 30 college and high school students comprising the Citizens Climate Lobby San Mateo Youth (CCLSMY), a stand-alone group associated with the nonprofit Citizens Climate Lobby which advocates for a carbon fee and dividend.

The idea for the rally stemmed from a meeting between the group and Rep. Jackie Speier (D-CA-14) regarding her efforts to pass a carbon fee and dividend as part of a bill she is co-sponsoring—The Energy Innovation and Carbon Dividend Act (H.R. 2307)—in the House of Representatives, said the group’s youth leader Róisín McElarney, a pre-law major at the College of San Mateo. “She suggested that we hold a rally to raise awareness about carbon fee dividend.”

According to Citizens Climate Lobby, “Carbon fees are proposed fees collected for the cost of burning fossil fuels; the dividends are the fees collected (minus administrative costs) and returned to Americans to spend as they see fit.” The nonprofit advocates that accounting for the true cost of fossil fuel emissions creates a level-playing field for all sources of energy and informs consumers on purchase decisions. 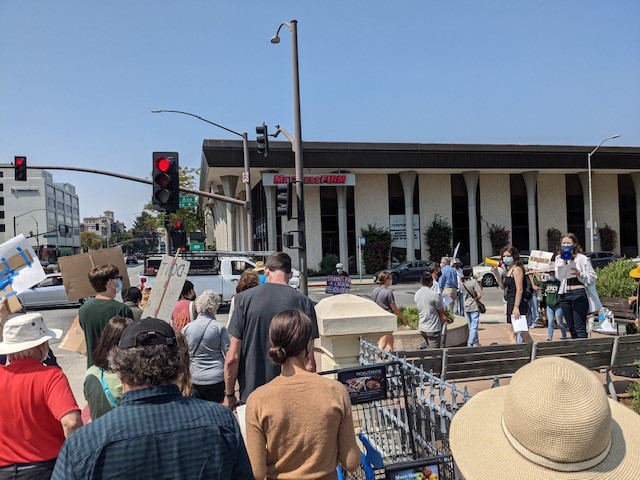 “As the Sunrise Movement got attention to the Green New Deal, we’re trying to get attention to a carbon fee and dividend,” said McElarney about the demonstration and rally, the group’s first. “So that phrase is really important to our message.”

McElarney pointed to San Mateo Deputy Mayor Bonilla as the “star of the show” who garnered positive reactions from the large park crowd and also helped CCSLMY plan the demonstration and procure its permit. “He’s just been really outspoken about climate change and climate action for quite a while now; he’s really been an environmental champion,” she said.

During her speech, McElarney touched on the importance of voting and spoke out against hollow climate declarations by “various governments and companies who have something to gain from appearing benevolent,” but who fail to take action toward true meaningful change. “We have to demand concrete goals, demand that they act to not condemn or mitigate climate change, but stop it. Because that’s what’s going to make the difference between a humanitarian crisis and a beautiful day at the park,” said the CCLSMY youth leader. 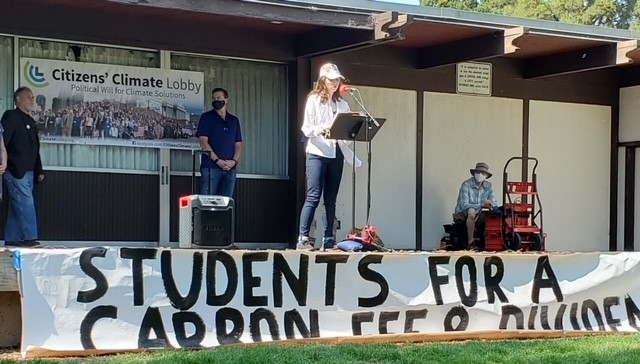 In terms of the constituents in the area, McElarney said CCLSMY aimed to “get the word out and raise awareness for the carbon fee and dividend,” while their aim regarding the politicians in the crowd was to “demonstrate to them that their constituents care about a carbon fee and dividend, they want climate action and it’s important to them. And this is something worth pursuing for them.”

She said once they have established that message through demonstration, they’re planning on meeting with local political leaders and discussing specific plans for what they can do.

McElarney said since CCLSMY is local, they’re focused more on the Bay Area and are also working to further the issue of how to address climate change at the state level and the regional city levels.

In all, approximately 150 gathered at Central Park for the rally, including passersby who were attracted to the activity on what was a beautiful, sunny day. “People were excited the whole time—they were engaged,” said McElarney about the crowd. She said the group will look to host similar rallies once per year in the future.

All photos by Cynthia Sandoval except for the march photo, which is by Mick McElarney 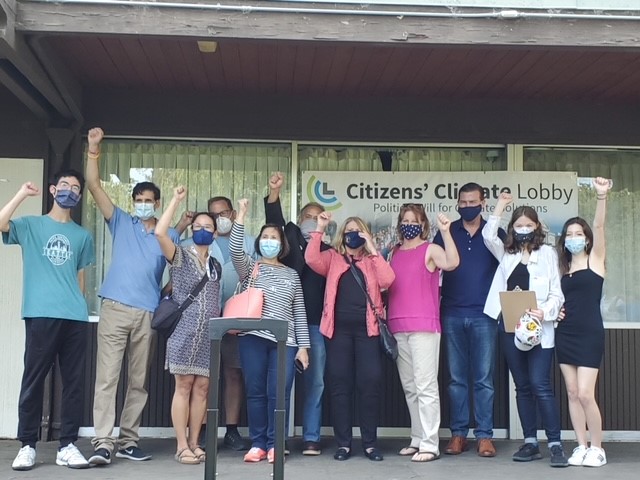 SamTrans riders in East Palo Alto and Half Moon Bay will soon
By John Shroyer The San Francisco and San Jose Railroad linked its
A candelight vigil at Mac Dutra Plaza on Main Street in Half
Often during the winter, I’ve traveled to Italy, especially Tuscany. In my
Scottish American naval captain John Paul Jones earned fame during the American
Go to Top