Ponder the scenario: the 16-year-old asks for the keys to the car. What emotions burn in the chest as visions of mechanical chaos reel off in the brain? Menlo Park’s Jess and Elizabeth Love reckoned with similar feelings with son Jesse — when he was five.

They gave him the keys.

Toyota has brought him onto the team for training and given him the team’s top car. As ARCA puts it, Jesse drives “famed No. 16 NAPA Auto Parts-sponsored Toyota, inheriting a ride that has won six West Series championships dating back to 1999.”

He’s on a trajectory to becoming a full-fledged NASCAR driver, part of a system that produced famous champions such as Kyle Busch and Martin Truex. He and his team have no doubt he would, and could, run NASCAR races against the best in the business were he able to do it today, but it’s against the rules.

He seems perfectly ready to be a champion, not only in skill and talent but in poise, aplomb, presence and presentability. Climate first profiled Jesse Love in 2016 as he and his home-grown, Redwood City-based team were tearing up the USAC midget racing circuit. At the risk of being repetitive, he was the youngest champion in the history of that circuit, too.

That profile observed that Jesse, then 11, “sounds very grown up for a person his age,” and quoted mother Elizabeth saying that “spending so much time with his dad and so many grownups in his life he’s learned to be a very, very good communicator.”

The high school senior is fully aware and can clearly enunciate how to pursue the pinnacle of his chosen profession. “We’re all in this together,” he said. “The one person I owe this to, with the exception of God, is my dad.

“…Now it takes more than just being a driver. You have to be a good spokesperson, you have to be likeable, and you have to drive. I owe that all to my dad and everybody at Toyota who have been managing me. Right now, it’s a hard hill to climb. It’s harder than climbing danged Mount Everest. 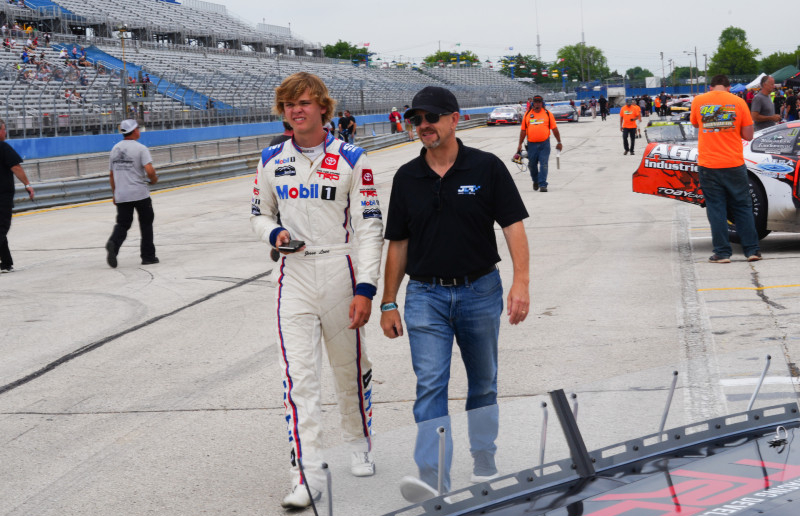 But, “…I have the trust of the people that sponsor me, people that manage me and people that trust me to do the right thing every weekend. It’s not a trust thing or a pressure thing, it’s just that we’re a team and I’m going to pull my weight. I’m the luckiest guy to be in the seat of the car and go win races with it. So, I’ve got to work the hardest of the team and be the best leader I can be, on and off the racetrack, 100 percent of the time.”

Living away from home is contributing to the adult-level pressures of his job. Six months ago, he and driver relations representative Dustin Edge moved to Cornelius, N.C.

Anyone who hasn’t heard of it clearly is not a stock car racing geek. Cornelius, a suburban area on Lake Norman north of Charlotte, population 25,000, is close to the geographic center of stock car racing, a quintessential American sport born of moonshine runs of the early to mid 1900s where outlaws souped up their daily rides to outrun police. Think “Smokey and the Bandit.”

Twenty racetracks are scattered through North Carolina’s piney woods. “I can chase my dreams out here,” Jesse said, “where all the race teams are, the NASCAR Hall of Fame is. Tracks are here. This is the racing hub.”

Racing is so of Cornelius’ essence that eight of the 17 “notable people” the community lists on Wikipedia are racers.

As for living away from home at the age of 16, “it’s obviously young,” he said, “but you want to kind of get the growing pains out of the way, living on your own, learning new things about yourself and maturing. I’d rather do that now than I would when I’m in the truck series or the Infinity series where there’s even more pressure on you.”

In the next two years he will move up three levels, through truck racing, which races Fridays, to the Xfinity series, which races Saturdays, to NASCAR Cup races on Sunday.

Each level differs. Menard Series ACAR cars debuted as previous-generation, carbureted NASCAR racers restricted in maximum RPM. A new standard Ilmor 396 V-8 engine and intake restrictors equalizes the field. Truck racers are similar but with a pickup truck-like body, a different “aerodynamic package;” Xfinity Cup car ignition and RPM limits are higher. Power plants for all are similar, delivering 700 to 750 horsepower, but critical other features, such as aerodynamics, ignition, tires and special tweaks, all of them treated as top secret, vary performance.

With such different machines to drive, how does a driver keep winning?

Two things, as father Jess, himself a former champion midget driver, said five years ago: comfort with speed and a special spatial sense that can’t be taught. “It’s the understanding,” he said, “they can fit a five-foot car into a five-foot hole.” At the time he was talking about doing that at 60 mph. Now it’s speeds approaching 190 mph. 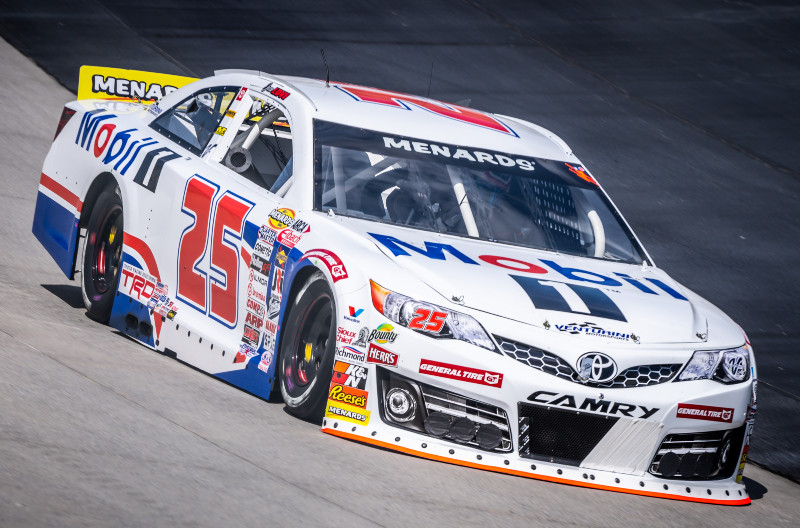 “Sometimes I’ll be watching from the stands,” said driver relations manager Edge, “I’m like, ‘there’s no hole, he can’t get through, he’s stuck.’ And I’ll watch him throw his car into a gap that I couldn’t even see.”

Jesse has a particular driving style, with which he is perfectly comfortable. “I do like the brake pedal. I like the gas pedal. I make a lot of speed. I think the biggest thing with my driving style is I make speed.”

It takes a big team to field an ARCA car and driver. Toyota and NAPA Auto Parts are sponsors. Owner of the 16 car is Bill McAnally Racing of Roseville, which has fielded several champions in the last three decades. Jesse also drove Venturini Motorsports’ 25 car last year.

Jesse has a regulated lifestyle that emphasizes health, fitness, learning, training and practice.

It sounds like astronaut training or, as his father says, “creating an Olympic athlete.” Up and in the gym at about 8:30 a.m. for an hour’s workout. A trip to the Toyota Performance Center for meetings and time in the “sim,” the front half of a Toyota car in a darkened video room that can simulate with great realism any of the tracks he might run. Teams of engineers monitor the sim to adjust the setup in real time and according to his performance as he is learning the nuances of the track and car.

After five or six hours at the performance center, he’s home, if not attending high school through On Track, an accredited online K-12 school many very young professionals-in-training in many sports use, then plotting the week’s race on paper.

“It’s become normal to me,” he said, “but it is really cool when I go to new racetracks like Dover, Iowa, Gateway, Phoenix.

“When you get to go higher speeds and you go to bigger racetracks everything is coming at you so fast and you’re becoming overwhelmed,” Jesse continued. “But then over time things slow down and it’s more like a short track. It’s a real interesting dynamic. Being a racecar driver is unlike anything else, where you’re so close to that threshold of fear and speed and death and adrenaline and all that stuff. It’s really cool and something I’ve become used to.”

At the end of all that preparation, the racing hubbub, the concentration and the performance, there is a reward. A state of calm and joy. It’s “when you’ve won a race and you have a lap to cool down. You don’t even feel like you’re in the car. You’re so overwhelmed with emotion.

“I won the championship in Phoenix. Doing a burnout at the track that I grew up on — when I was 11 years old when you interviewed me — I was going from there to watch Alex Bowman, a mentor to me and a good friend. Just watching there as a fan, a little guy, and you come there four years later and win a championship, and you’re going to do a burnout in front of all these fans — that was probably the biggest moment of, like, Zen and calmness that I ever felt in a racecar.”

Feels good to be a winner.

ARCA races are broadcast on NBCSN and live streamed on TrackPass. Details available at www.arcaracing.com.