The Covid lockdowns forced Gail Waldo, like millions of other Americans, into a prolonged time-out from doing her usual work and having friends over to visit. But the Belmont resident may be unique in her ability to count those lost hours.

Waldo collects clocks, so many, in fact that she can’t begin to put a number on her timepieces.  Eight hundred perhaps? Easily, she responds.

They’re everywhere in her residence: On all the walls, in display cabinets, on desks, and in the bathrooms.  When she left off keeping a census in 2012, Waldo had listed 60 clocks on one wall, 206 on another, 17 in the bathrooms, and three on a coffee table. Plus 40 in the kitchen out of which, pre-Covid, she operated a thriving business making old-fashioned cut-plug licorice. The kitchen clock count has grown to 54.

Waldo comes by her love of clocks naturally. Her father, Herbert Miller—aka “Pop”—was a watchmaker who did repairs at the University Avenue jewelry store of Boris Small in Palo Alto. The Miller family had clocks everywhere and Pop wore six wristwatches. In later years, after he and his wife, Wilma, moved to a retirement community, he gave daughter Gail some spare clock parts and only a few clocks.

How It All Began

She essentially started from scratch collecting—and creating—clocks. The hobby began with about a half dozen crystal clocks from thrift stores, which is where she has discovered many of her treasures in the 25 years-plus that she’s been amassing her collection. She also finds clocks at estate sales and online.

But many of her clocks “found” her. Friends who knew she collected gave her gifts, including a grandmother clock. Even today, when she concedes that she might have to “swap out” clocks to make space for new ones, she wouldn’t “insult somebody” by turning down an offering. “I’ll take a clock,” she says.

A longtime graphic artist by profession, Waldo has an eye for putting together odd items—a teapot, a cup, a humidor, a filigree cotton ball container—fitting them with a clock insert, and creating a ticking conversation piece.

But she’s missing out on the pleasure of being able to tell visitors the back story on her clocks, because of the shelter-in-place restrictions that have come with the Covid. She used to be able to share her enthusiasm with typesetting customers and friends. “It’s always fun to see people’s faces.”

Waldo likes to group clocks, such as by type or color. A dozen cuckoo clocks share the same wall area. Tables are topped with alarm and desk clocks. There are red, yellow and blue clock clusters. Dark-colored clocks fill the living room, among them a redwood burl clock. One bathroom with angel clocks has a Greco-Roman vibe.

Only a few of Waldo’s clocks are antiques or otherwise valuable, including a Waterford crystal clock that was supposedly non-working when she got it at a white elephant sale. The tab needed to be pulled to start it ticking. It’s worth about $150.

She owns an opera clock which dates back to 1875, and treasures a desktop clock which was made specially for the Toledo Chewing Gum Co., begun by the first person to receive a chewing gum patent in the United States, in 1869. Waldo snagged it for $60 at a Salvation Army thrift store. A Seth Thomas clock featuring the Bible’s Rebecca at the well may be her most valuable clock. 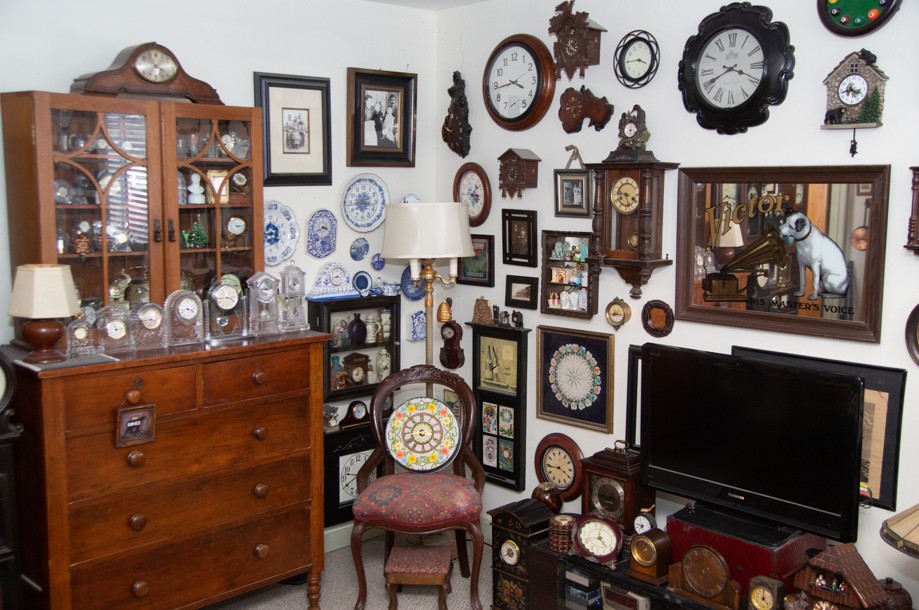 Among her whimsical clocks: one made out of a jigsaw puzzle glued to a backing, a Kellogg’s Tony the Tiger clock whose ears and tongue move, a Mona Lisa with clock hands on that enigmatic face, a baseball diamond clock and one that says “It’s Five O’clock Somewhere.” Hanging from a fishing line, a flapping-winged “Time Flies” clock whose hands spin wildly is not a clock at all.

Clocks, of course, tick, and Waldo likens the background sound in her apartment to rainfall. A few clocks erupt in chimes on the hour. One elegant clock with moving musician figures plays music box-style melodies including “The Blue Danube” and “The Waltz of the Flowers.” There are relatively few clocks in her bedroom: “Well I have to sleep,” Waldo explains.

Many of the clocks on display are her own creations—she gets most parts from the website Klockit.com and says, “I can make a clock out of anything with a clock-shaped hole. Anything. If it’s pretty, I’ll put a clock in it.”

There are so many she couldn’t possibly keep them all in batteries, but Waldo is philosophic. “I don’t care. They’re right twice a day.”

Pre-Covid, she had been earning a tidy income from two businesses. Among her other customers, Waldo Graphics, a graphics and typesetting company she started in 1973, had a big contract with San Mateo County to produce government forms.

Three years ago, she also perfected a recipe for cut-plug black licorice, caramelly rolls cut into little logs like elongated Tootsie Rolls.  She started selling them at the Redwood City Farmer’s Market in summer 2018 and was subsequently invited to sell at the Williams Sonoma store in Palo Alto as part of the store’s local artisans’ program. Her Black Lick Rich candy was a big hit.

With Covid, her graphics income plummeted as demand shrunk.  Some businesses which had provided her work have closed. “Just one thing on top of the other,” she says. “Dominoes.” Farmer’s markets have reopened, but Waldo isn’t allowed to give away free samples, even though they’re individually wrapped.

“It doesn’t make sense to do it if I have to wear a mask and no free samples,” she says. Licorice was “very profitable. Along with the typesetting, I was doing real well. Now zip.”

Ken Seydel of Redwood City became friends with Waldo through church and says she amazes him with the breadth of her knowledge, her memory and her creativity. When she turned her licorice recipe into a salable product, he became chief sales rep at the farmer’s market.

“I was the hooker who would promote it and try to stop people and get them to take a sample and try it,” Seydel says. “If they would take a sample and try it, they would usually buy it.” With something as unusual as licorice, “people don’t want to spend $5 for a bag of candy if it’s not good stuff.” Under the county’s cottage food industry rules, Waldo is also not allowed to do mail orders.

Until things loosen up, she’s stuck with more time on her hands than she could possibly want. And all those clocks to watch.

There’s no avoiding what may seem a rude question for this over-the-top clock collector. “I’m eccentric,” Waldo readily agrees. “Why not? I make licorice.  Who in the world makes licorice?”