Marilyn Krieger was inside her Redwood City home writing what would become a seminal book on cat behavior when she heard the helicopters whirling from above.

The commotion focused on a wayward mountain lion who had wandered into town and found itself cornered in a tree belonging to one of Krieger’s neighbors a few blocks away. Officials on the scene feared that the puma, estimated at 100 to 150 pounds and nearly two miles away from its natural habitat, presented an immediate public danger.

Krieger emerged from her house, took one look at the mountain lion and noticed something the others were missing. “The poor thing was terrified,’’ she said. She is a preeminent expert on cat behavior, a go-to resource for pet owners worldwide. But no one knew any of that when Krieger stumbled into the tense scene and tried to sound a warning.

“And I was this crazy woman going, ‘Everybody, you’re terrifying her! Just leave her alone and she’ll leave. ‘Let her be. Let her be. Just go away.’ And they wouldn’t.”

That episode on March 29, 2011, ended with two fatal rifle shots from a game warden about 11:15 a.m. As it turned out, the big cat was a lactating female, her terror likely exacerbated by concern for her cubs.  “It upset me so much,’’ Krieger said, “that I started researching.’’

Cats in the Wild

Roughly 10 years later, her quest continues. Krieger has since joined forces with the Felidae Conservation Fund, which notes that all 36 wild cat species are threatened or endangered due to human impacts. Loss of habitat and prey are two common challenges facing wild cats, according to felidaefund.org, and the problems are on the rise because of human population growth, development and encroachment.

Krieger also writes prolifically on her website, Urban Edge Wildlife, about the challenges mountain lions, bobcats and other critters face in the age of urbanization.

This story was originally published in the January edition of Climate Magazine. Click here to read the full digital publication.

She understands household cats, too, and is sought out by national media outlets such as USA Today whenever reporters need insight on feline mysteries. (Martha Stewart Living magazine once quoted Krieger extensively in an article headlined “Why Your Cat Loves to Sit on Your Laptop.”) Her book about changing cat behaviors—“Naughty No More!”—won numerous awards, including one from the literary minds at Tidy Cat.

And of course, there’s still her day job helping befuddled pet owners trying to figure out why, say, Fluffy pees outside the litter box. The Burlingame High graduate has become known simply as The Cat Coach. And it’s best to listen up. As the San Francisco Chronicle once wrote of Krieger, “The Cat Coach is less of a cat coach than a cat drill sergeant. Maybe a cat czar.”

Krieger originally had a different career path in mind. She earned a degree in art from UC Davis in 1976 and started out professionally as a graphic designer. She later worked as a human-factors engineer for a large tech-company, when she took a lot of classes in behavior.

Landing on Her Feet

Then, in 2005, she was laid off. Krieger used the juncture as a springboard into a life for which she seemed destined. “I decided to do what I really love,’’ she said. “That’s when I really pursued cat behavior.”

In retrospect, this path looked inevitable. The Kriegers have been in the area since 1849, and her genealogy could be rendered as Family Cat Tree. Her mother volunteered for the Peninsula Humane Society, as did her grandmother. Growing up, there were always pets around her Burlingame-area home. And if all those cats and dogs weren’t enough, young Marilyn would venture into the weeds and (as much as she hates to say so now) trap some other critters to examine.

Years later, as part of her life-changing career shift, Krieger started traveling to veterinarian conferences and reading as much as she could. She joined the International Association of Animal Behavior consultants in 2005 and later became the chairperson of their cat division. Her early specialty was the domesticated Bengal cat breed, and she eventually served for many years as the coordinator of California Bengal Cat Rescue.

Why Bengals? “Their behavior and their intelligence. They’re like little Einsteins,’’ Krieger said. “They are highly intelligent. And Savannahs also. That means they’re highly trainable.”

One of her own Bengal cats, an 18-year-old named Jinniyha, is so brainy that she doubles as an amateur engineer. Krieger explained with a laugh how Jinniyha loved watching her pull apart a cat water fountain for cleaning.

“And one day I went off to do a consultation, and when I came back, the whole floor in the bathroom was flooded,’’ she said. As it turned out, the clever Bengal cat tried disassembling the thing herself. Krieger later found pieces of the fountain hidden all over the house.

If only some pet owners were as clever as their furry companions. Instead, some common mistakes lead to needless challenges around the home. Krieger’s website (thecatcoach.com) allows people worldwide to sign up for a 90-minute consultation at the rate of $305.

The sessions are so helpful in addressing most problems—litter box issues, inter-cat fighting and so on—that the Peninsula Humane Society has honored Krieger for her efforts to keep cats from being surrendered unnecessarily due to fixable behavior problems.

Every cat is different, Krieger said, which is part of the fun for her when it comes to solving new mysteries. But there are two general themes of advice.

For one, the first stop for any change in cat behavior should be the veterinarian’s office to make sure nothing medical is causing the problem. For another, owners should consider the atmosphere they’ve created for the non-humans in their house. Are there enough scratching posts? Ample litter boxes? Have they been patient and methodical enough when introducing new cats into the household? 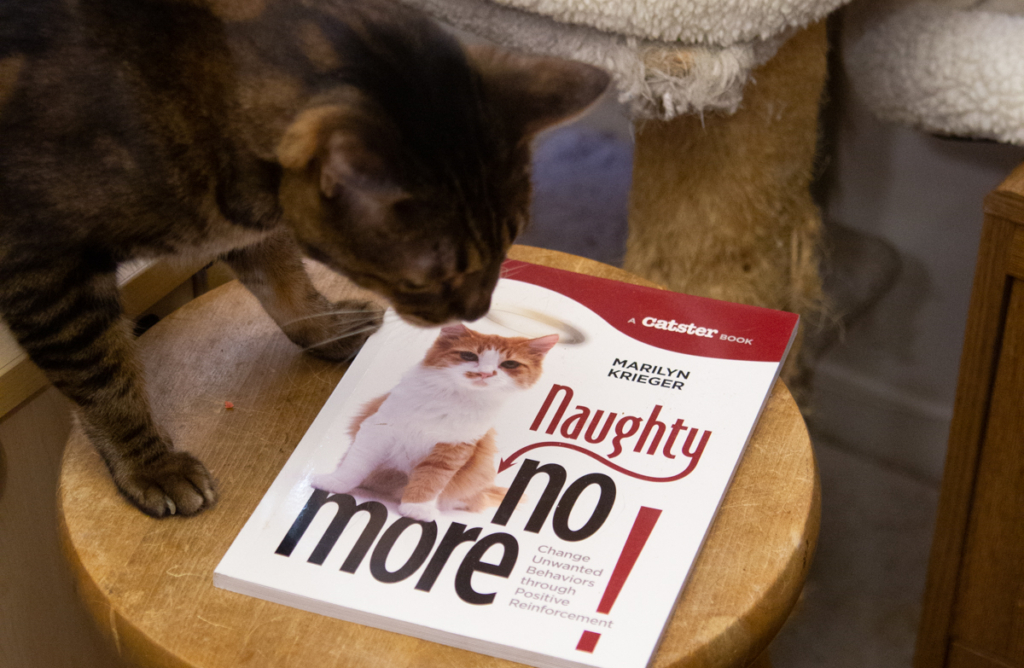 Beyond those basics, Krieger brings her expertise in cat psychology. The cure to most behaviors, she said, is to decode the reasons behind them. Sometimes, you have to think like a cat.

“People will say things, ‘My cat is getting back at me. They’re revenge-peeing!’’’ she said. “But cats do not do that. Yes, there are always reasons for behavior, but that’s not one of them.”

If a cat is scratching up a sofa, blocking that area probably doesn’t fix the issue. But putting a nice scratching post in front of that area might. “That’s actually, my main thing is to educate people and figure out why the cats are doing the behavior and address those reasons,’’ she said.

The pandemic has only upped the need for her services. Calls for consultations are way up, especially now that some people are returning to their offices, which means some cats (and some owners) are struggling for the first time with separation anxiety.

“Some people—not everybody—think that cats are low-maintenance and that all you have to do is throw a little food at them and maybe clean their litter box,’’ Krieger said. “And it’s not so easy. Cats need attention. They need enrichment, you know?”

In one case last spring, a San Carlos resident woke up in the wee hours to discover two of his four cats – who had always gotten along – involved in a vicious and bloody fight. And the tension did not abate, even after the man broke it up. As it turned out, his wife was out of state on a long business trip while he was spending long days at a jury trial that left him drained and tense.

The fighting cats may have been responding to the stress and disruption. At any rate, Krieger coached the client through keeping the cats separated to make sure there were no turf wars. She taught him the proper way to de-escalate any tussles – with a calm voice and a large piece of cardboard that worked better than trying to pry the cats apart. Krieger also urged him, among other tips, to add more scratching posts and cat trees to help reduce aggression.

It took a while, but by late summer the combatant cats were curled up in the same bed again, purring during long naps.

Thankfully, local officials are doing a better job of heeding her words when it comes to the bigger ones roaming around Northern California: Krieger stepped in again not long ago after the San Francisco Public Utilities Commission weaved twisted wire strands along a fence of a crossover spot for local wildlife. This was a potentially ruinous situation for her favorite canyon, as Krieger explained in a blistering post at urbanedgewildife.org.

She detailed the harmful effects such barriers can have on the ecosystem, then stressed the urgency by bolstering the post with video captures from the cameras she’d set up along the corridor fence. The unsettling footage showed bucks getting their antlers caught in the barbed wire.                    With that, Krieger went far beyond taking out her frustrations at her keyboard. She explained slyly that she made a few “modifications” to the fence. And, presto, the animals can come and go again as they please. She’s a rebel with an actual cause.

“And the PUC is very aware of it. Because I told them: It was me,’’ Krieger said. “I’m not hiding anything.”

Krieger worries for the long-term future of big cats on the Peninsula. Gates are easy to address. The issues of climate change and urban expansion are not. But take heart in knowing that The Cat Coach will remain dogged in her pursuits.