The largest crowd ever assembled in Redwood City’s Courthouse Square – officially estimated at 3,000 but appearing closer to 5,000 people – enthusiastically cheered Saturday as an array of determined high school and middle school students pledged to take the necessary political steps to bring about meaningful and effective gun control and gun reform legislation.

But amid articulate and impassioned speeches and the warm response of a crowd that overflowed the square and shut down Broadway, a question lingered: Will it actually happen? Can the fierce urgency of now translate into a continued effort that will survive setbacks, opposition tactics and the changing tides of time and circumstance?

The students say yes, and there are elements of how this one rally was organized and carried out, and how it occurred in concert with hundreds of rallies on the same day throughout the nation, that suggest they could be right.

In speeches and interviews, participants and organizers acknowledged that this could be a long fight. That was implicit in the repeated calls to vote out of office those who would resist meaningful gun legislation, the calls to register to vote, the assertion that this generation of students would soon be old enough to vote, to launch political campaigns and to run for office. And there was an assertion that the youngest students, middle schoolers, would be right behind them.

“I’ve always been really passionate about gun control and reform,” said Carlmont High School senior Sophie Penn, one of the Saturday rally organizers. “It’s upsetting that this opportunity is before us. I’m really glad to see all these students are really rising to the occasion.”

But less than a year from now, Penn will be in college, miles away from Redwood City and apart from the circle of friends and peers who staged Saturday’s successful rally. And within four years, so will all the other rally organizers.

“There have been a lot of historical movements that have been led by young people across this nation,” Penn said. One of her goals, she said, is to “inspire the next group coming along” of middle school and younger students, many of whom were evident in Saturday’s crowd.

Jordan Hanlon, also a Carlmont senior, said that when the demonstrations and protests die down, “I’ll still be fighting for the same cause.”

Holly Newman, one of the rally speakers, asked for a 17-second moment of silence, symbolizing the 17 students killed at Marjory Stoneman Douglas High School.

Then she said, “The time for silence is over. We are ready to be heard and we are going to be heard. We will not stay silent and we will not back down until we succeed in making our nation a safer place.” 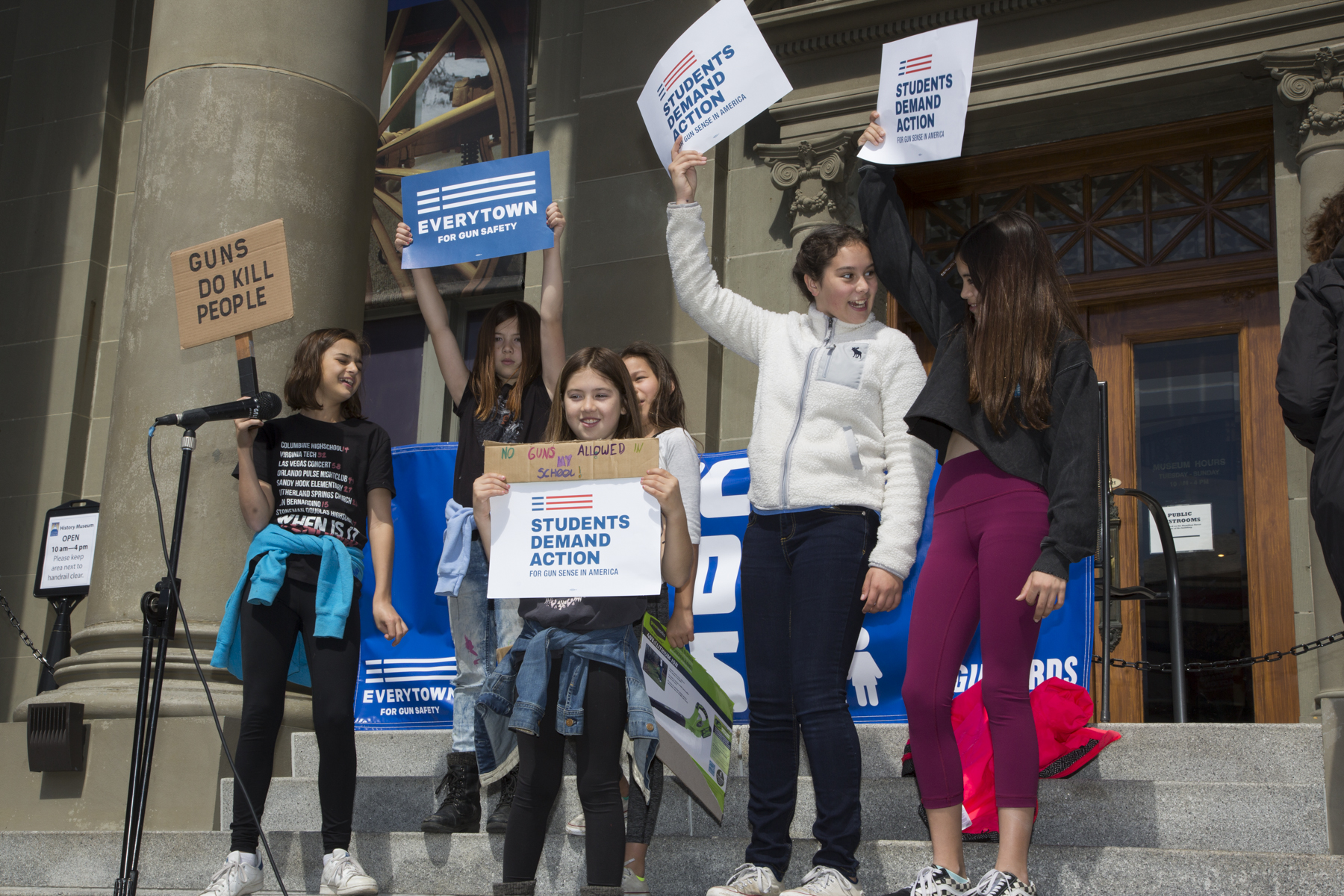 Any student of national mass grassroots movements can tell you that each has struggled to sustain itself over the years, sometimes decades, it took to overcome the entrenched interests they were seeking to challenge and to change. Revolution takes time and makes people uncomfortable.

The civil rights movement, which some would argue still has far to go, was marked by dissent and disagreements between established leaders and young activists over tactics, targets and rhetoric, even as an older generation worried about incurring the wrath invited by confrontational behavior.

In the women’s movement, there were decades of dispute about the “proper” role of women in the home and the workplace, disputes still in evidence.

The antiwar movement of the Vietnam era generated mass demonstrations on a scale akin to the gun reform demonstrations. But demands to “end the war now” were also met with counter-demonstrations and an entrenched military-industrial-political establishment and the war continued for years. And the leadership of the movement was a mixed bag of idealist, sincere organizers, opportunists, and outlandish radicals who often dominated the attention of the news media.

For openers, the students leading this effort are the best and the brightest – a generation of students taught to work on group projects and to speak publicly. The speakers at the rally, to a person, were remarkably poised, as if they had been doing this their whole lives. Certainly, it could be argued, their schooling had prepared them for this moment.

Spurred by parents and taught in classes with heightened expectations, they demonstrated a level of critical thinking and sophisticated political understanding that could not be innate but learned.

Brooke Bettinger, a 16-year-old from Los Altos High, carried a large tri-fold cardboard poster at the rally that read: “This used to be my brother’s science project but now it’s a protest sign because politicians think money from the NRA is more important than our lives.”

The antiwar movement of the ‘60s was led by a generation that had grown up with air raid drills, the Cold War and the reality that a nuclear holocaust could destroy everyone in a moment.

This generation has been going to school in the era of school shootings, campus lockdowns and a seemingly unending string of moments of silence and flags at half-staff.

“I’m part of a generation growing up knowing nothing but school shootings,” said Stefan Sujansky, a Woodside High School senior, rally co-coordinator and event emcee. “It’s far too normal. I’m sick and tired of having to watch school shooting after school shooting while politicians do nothing. … We should have a voice in how this issue ends.” 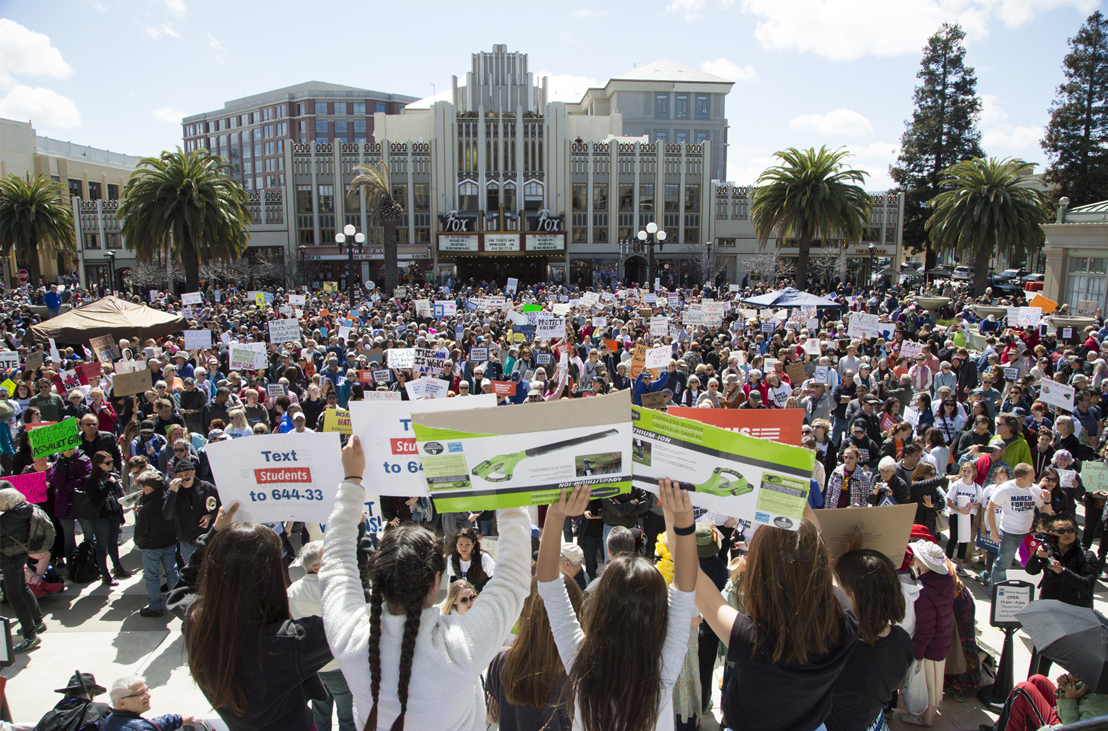 And this is a generation raised on technology and social media, armed with tools that facilitate networks of like-minded people.

One of the criticisms of social media is that it reduces our exposure to opposing points of view. But as a tool for unifying like-minded people interested in embracing a singular cause, it is unprecedented in American or world history as a means to that end.

As they prepared, the rally organizers sent out a call for speakers. Those who wanted to speak had to submit a Google form and a copy of their remarks to make sure their speech was in line with the overall message.

And everyone got the message. The words, the sentiment, the calls for action, the list of priorities were in sync with the speakers at the rally in Washington, D.C., and San Francisco and throughout the nation.

So, it could well be that this time is different – that the circumstances, the people, the means at their disposal and their facility in leading have come together at this time and this place and in a way not seen before.

Menlo-Atherton freshman Brynn Baker, standing with four of her friends in the crowd, put it this way: “Something needs to change and the adults are not going to change it. … In four years, we’ll all be eligible to vote.”

The Redwood City community is in mourning following the deaths of Grace
A pair of Peregrine falcons have nested high up on the front
A capacity crowd at Chez Nous Café in Redwood City cheered 16-year-old
Lick it. Stick it. Post it. Stamps have been integral to American
September Nights on B Street is set to return to San Mateo
Go to Top