Thousands of visitors and residents are expected to attend Fourth of July festivities in Redwood City this year, which include the annual parade downtown, a festival, a pancake breakfast, a 5k run, Chalk Full of Fun, concerts, and, of course, a fireworks show.

Between 8 a.m. and 4 p.m. on both Tuesday, July 3 and Wednesday, July 4, chalk art will occur on Courthouse Square.

At 9 a.m., there will be a car show at Broadway and El Camino.

And the 32nd Annual Festival will run from 9 a.m. to 5 p.m.  on several city blocks (see map below). The festival will feature arts and crafts, food, beverages, a battle of the bands, and kids’ activities. 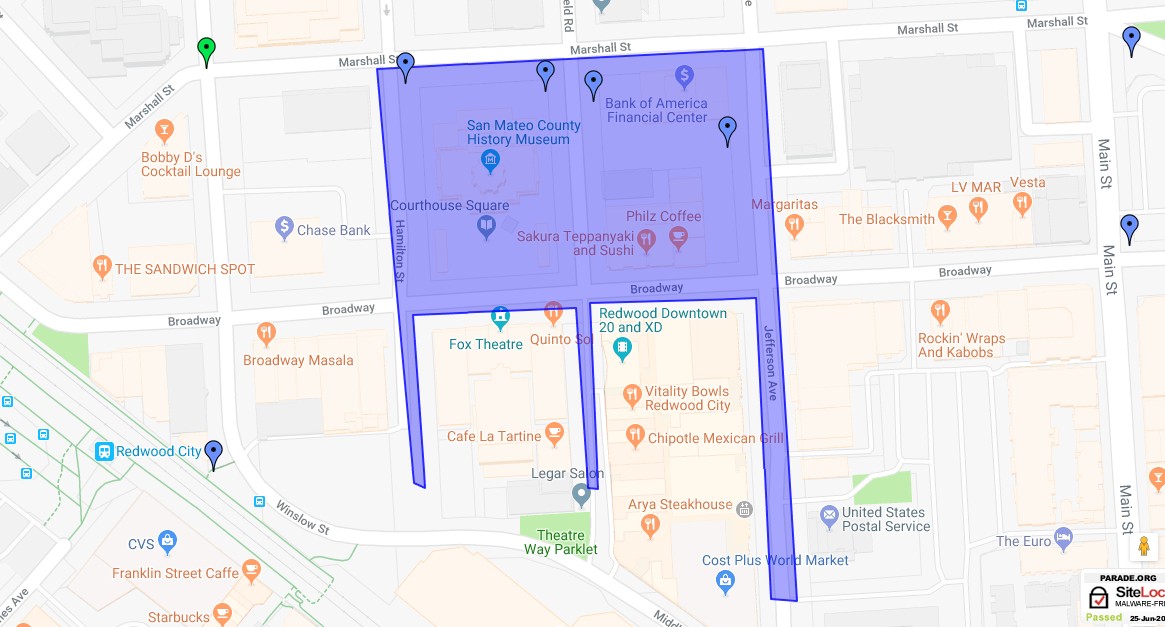 A concert at the Port of Redwood City, featuring Fog City Swampers, will occur from 5 p.m. to 7 p.m.

And finally at 9:30 p.m., the fireworks celebration will occur at the Port of Redwood City.  Food trucks will be available from 7 p.m. – 9 p.m. The Port is providing a public viewing area along the waterfront off Seaport Court. Portable restrooms and sinks will be available. Attendees are not allowed to BBQ or bring alcohol to the show.

Meanwhile, the San Mateo County History Museum will present “An Old Fashioned Fourth of July” within the museum between 10 a.m. and 4 p.m. where “children  can hand-crank homemade vanilla ice cream and then take a taste. They will also make traditional Independence Day crafts to take home with them.” Also starting at 1 p.m., adults can view vintage films of the San Francisco Peninsula from the Museum’s archives. Museum admission will be half-price that day: $3 for adults, $2 for seniors and students and, as always, free for kids five and under.

No Fireworks in Redwood City

As we reported in April, the city of Redwood City is serious about prohibiting any fireworks within city limits aside from the Port of Redwood City’s show, with City Council approving fines of up to $1,000 for violators.

By Susan Jenkins Every Thanksgiving, my family traveled to my grandparents’ small
Every year, retired newspaperman Bill Shilstone tells himself the same thing. “I
Hillsdale Shopping Center kicked off the holiday season with its annual tree
Coyote Point is one of my favorite spots to stroll. Everywhere, there
By Dan Brown It’s a day off for the circus, so Giovanni
Go to Top