A parent-driven campaign aimed at saving Redwood City schools from closing got off to a promising start last month at Orion school with 130 letters signed and mailed to local legislators.

The letters ask lawmakers to work to end an “equal but not equitable” school funding system that does not account for regional differences in cost of living. The inequity is partly to blame for a $10 million budget shortfall over three years that led the Redwood City School District to mark four of its 16 campuses, including Orion, for closing at the end of the school year.

The campaign was begun by a few Adelante Spanish Immersion parents upset that their program, like Orion’s, is being moved. They felt that the reorganization plan falls heaviest on the Latino community, and they resolved to do something about it.

At their own expense, the group, now expanded to 15 and representing several schools, prepared 1,000 sample letters, half of them translated to Spanish, and an accompanying brochure for distribution at all district schools. The brochure lays out in detail, with colorful graphics, the school funding system that puts Redwood City in its budget bind. It was written and produced by Vanja Douglas, a UCSF physician, and Ann Hynecek, a graphic designer. 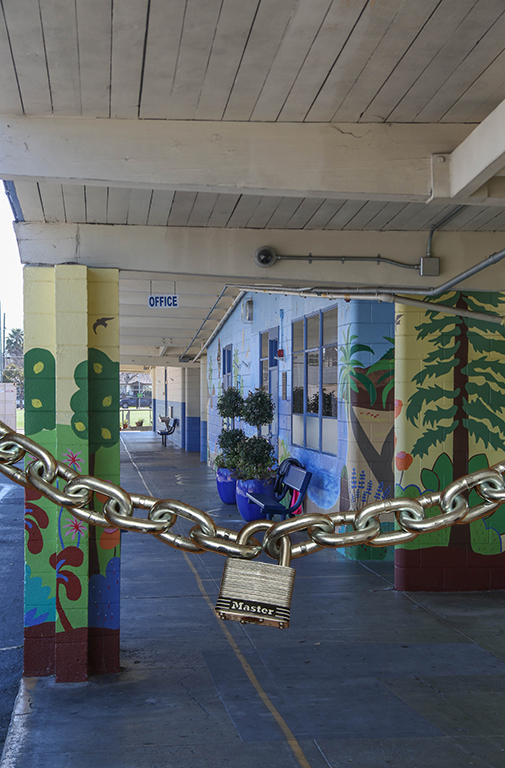 “If we can convince our Legislature to allocate school funding with an adjustment for regional cost of living, the district would have enough additional revenue ($19.6 million) to keep all of our neighborhood schools open,” Douglas writes in the brochure, which is titled, “Parents – Raise Your Voices!”

The printed package ends with the names and mailing addresses of local assemblymen and senators and five state officials, including Gov. Gavin Newsom. It suggests parents either sign and mail the sample letter or write their own.

The letter-writing campaign is one of the several ways the Redwood City school community is responding to the reorganization plan, which was adopted in November.

Most parents are resolved to make the best of it, according to district administrators, teachers and active parents asked for comment, but action and reaction runs the gamut from “goodbye” to “let’s pull together and make it better.”

Some are leaving the district or switching to charter schools. (“We have picked up a few students from families who are concerned about the changes planned in the district for next year,” said Alicia Yamashita, director at Connect, which is housed at Fair Oaks School.)

“The changes have caused us to give more serious consideration to private school, and to change the public school options we were most seriously considering, because some of them are being upended,” said Kirsten Heimpel, parent of an incoming kindergartner who lives in the Clifford School attendance area. “My sense is that others are taking similar steps.”

Most families are making the transition smoothly, according to district Director of Communications Jorge Quintana. He said more than 800 current Selby Lane, Fair Oaks, John Gill and Hawes students will move to a new school next year. In addition, about 600 Adelante and Orion students will move, with their alternative programs intact, to Selby Lane and John Gill, respectively.

“During our one-on-one meetings, each family was asked to select three options for their new school, and the vast majority of families were granted their first choice,” Quintana said. He said the district has worked with the Redwood City Teachers Association to allow all the Orion and Adelante teachers to stay with their programs. In addition, he said, the district is fostering the “pull-together” response by organizing get-acquainted field trips and campus tours for displaced families.

On March 2, for example, there will be a community-building party at Selby Lane, where the Adelante and Selby Lane Spanish Immersion programs will combine in August. “Families will hear more from the district about their new schools as details of the transition plan continue to come together,” Quintana said.

Regarding the letter-writing campaign, Quintana said district trustees at their Feb. 6 meeting expressed appreciation for the parent efforts.

For Kevin Sugar, president of the district teachers’ association, “It is heart- wrenching that teachers who have put their heart and soul into developing great collaborative programs will have to start over at new schools. There still is a lot of disillusionment and anger with families and teachers.

“That said, all we can do is make the best of a bad situation, and we are doing that. I’m in my 21st year, and there is still a lot to love in Redwood City schools.”

This story was published in the March print edition of Climate Magazine.