During the San Mateo County Board of Supervisors’ celebration last week of National Poetry Month, Aileen Cassinetto briefly described the Project READ poetry program serving inmates in the County Jail. And similar to many great poems, Cassinetto didn’t need a lot of words to express the program’s impact on her.

“I read somewhere that to be a poet you have to go hell and back,” said Cassinetto, who has been the County’s Poet Laureate since January. “These poets who happen to be in jail have been through so many hells. And reading their powerful poetry, it’s a way toward rehabilitation and toward rejoining their families.”

Cassinetto’s remarks occurred after the Board of Supervisors proclaimed April as National Poetry Month in the county. As part of her two-year honorary role as the County Poet Laureate, she visited the San Mateo County Sheriff’s Office inmate poetry program. The experience not only had a big impression on her, it led to some powerful poetry.

During the board meeting, Bill Burns, a longtime Project READ worker who teaches poetry to inmates, read one such poem written by a young inmate who was inspired by Cassinetto’s visit.

The poem, called “Startled Deer,” reads in part, “…I take a step forward, and a twig snaps. She looks up and sees me watching her. Our eyes meet and for a moment she holds my gaze. Then startled, she flees back into the woods. Even in her moment of fear, she remains composed and graceful. I step back and release the breath I forgot I was holding. I wonder if that dough could ever understand the impact she had on me, or the gratitude I felt for having had the good fortune to share her song.”

Burns said the program, a six-week course, helps inmates put their feeling on paper. Many of the poems end up in print, and currently about eight years worth of works from the Jail will be printed and then sent to local libraries, Burns said.

The program is just one example of the importance of poetry, and why county officials believe it deserves a month-long celebration in San Mateo County.

Cassinetto, a San Mateo resident, hopes to forward the county’s mission to uplift poetry. On Saturday, April 27, she is set to host Poetry & Community: A Concert at the Burlingame Main Library. The free event will feature local poets and the West Bay Community Band, and is part of Cassinetto’s Poet Laureate campaign, Speak Poetry, which aims to celebrate the literary arts and their roles in public life.

Cassinetto is the author of The Pink House of Purple Yam Preserves and Other Poems, Traje de Boda, The Art of Salamat, B & O Blues, and Tweet. She is the publisher of Paloma Pressopens a new window, an independent literary press established in 2016, which has released 12 books to date. 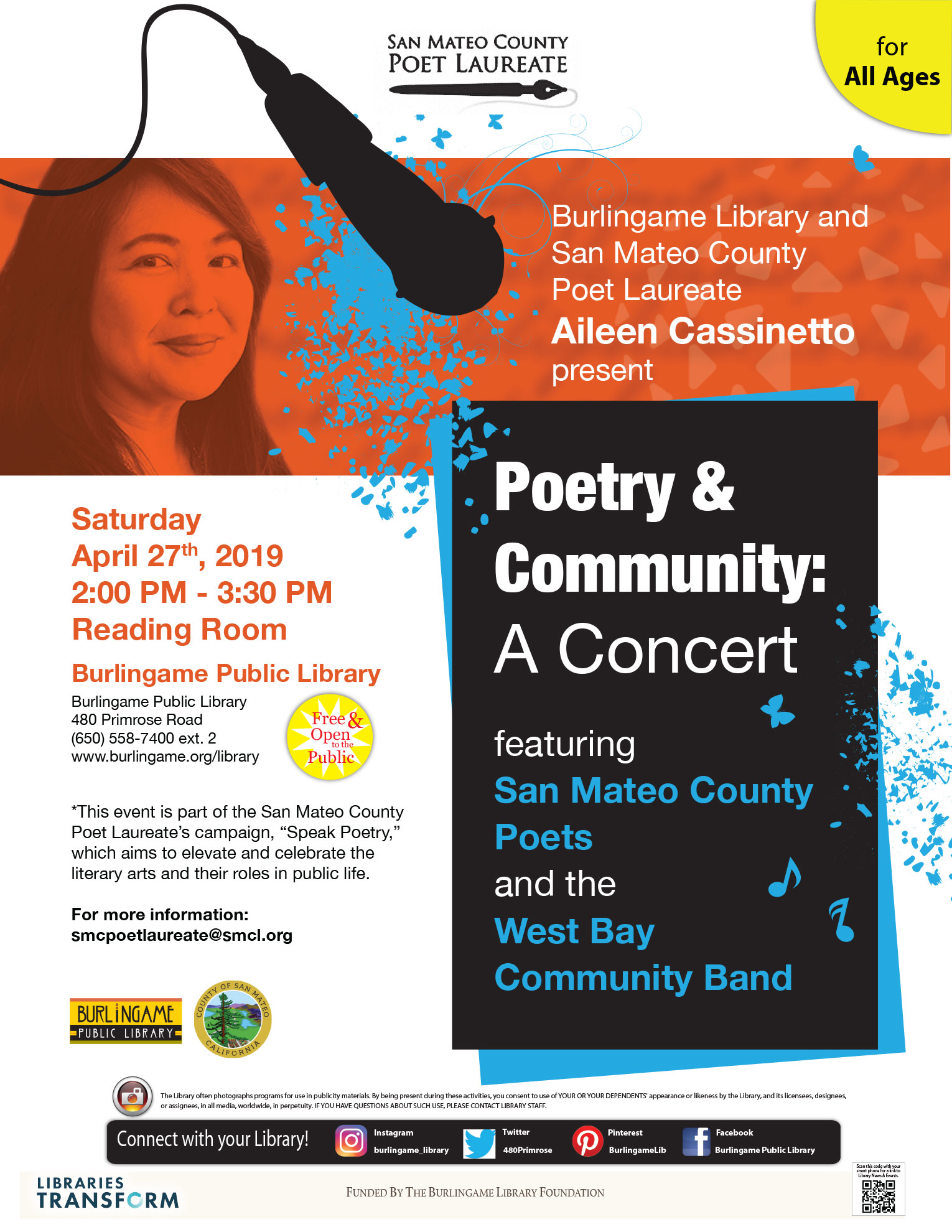