An increase in the number of homeless individuals counted during the biannual One Day Homeless Count in San Mateo County in January is largely driven by a spike in the number of people living in RVs, according to the County, citing data released by its Human Services Agency (HSA).

On Jan. 31, about 400 volunteers participating in the count identified 1,512 individuals as homeless, an increase from the 1,253 individuals counted in January 2017. Of the 1,512 homeless individuals, 901 were living on streets, in vehicles or in encampments, and 611 were living in shelters and transitional housing. Redwood City had the highest number of unsheltered homeless with 221, followed by Pacifica (116), East Palo Alto (107) and San Mateo (74). 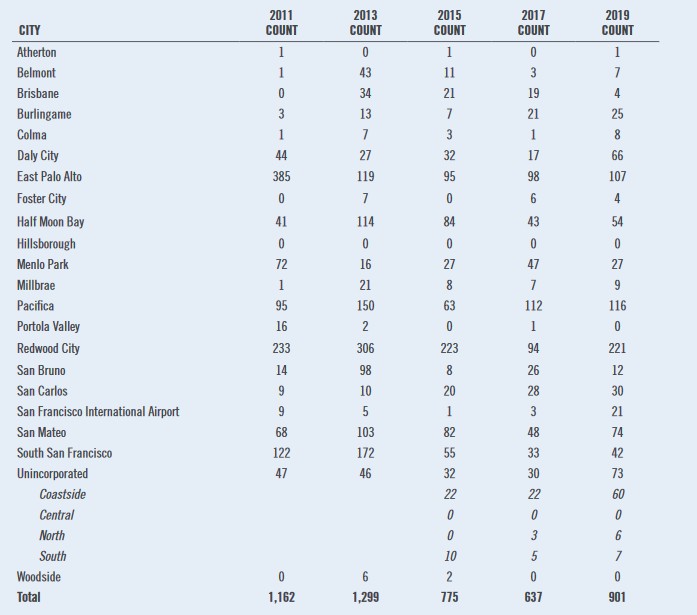 The results reflect the high cost and low availability of housing in the county, where rents for a studio apartment increased by 47 percent from 2016 to 2019, according to HSA Director Nicole Pollack. The conditions are causing residents with low to moderate incomes to struggle to maintain their housing, and making permanent housing unattainable for current homeless individuals.

“The extremely high costs and low vacancy rates in the local housing market remain a challenge. However, we are deeply committed to our homeless populations and have made great strides,” Pollack said.

The homeless count is conducted every two years as a requirement by the U.S. Department of Housing and Urban Development (HUD) to assess federal funding needs.

“The count is one critical tool to collect information that helps us understand more about those who are experiencing homelessness in our community and their unique circumstances,” said Pollack. “With homelessness, as with much in life, one size does not fit all and we really want to know who we are serving and what they need.”

The full report and executive summary are available at: https://hsa.smcgov.org/2019-one-day-homeless-count