Dozens of elected officials and 26 community groups and organizations in the Bay Area called on Redwood City’s council this week to reject proposals for development on the Cargill salt ponds.

A joint statement, posted in full below, was released Tuesday in the wake of apparent renewed interest by Cargill and developer DMB Pacific Ventures to develop the salt ponds. In 2009, the developer launched an effort to build high-density housing at the 1,400 acre industrial salt production site, with over half the property proposed as open space. The project was subsequently withdrawn following community and environmental opposition.

Earlier this year, the U.S. Environmental Protection Agency under the Trump administration ruled the salt ponds are not subject to the federal Clean Water Act, removing an important federal hurdle to development of the site. Following the ruling, Cargill and its developer announced an intention to re-launch public outreach on the property’s future, a campaign called Reimagine Saltworks.

At a press conference Tuesday, the coalition of opponents promised a vigorous fight against any development plans, saying the property should be restored to wetlands in order to protect communities and habitats from the future impacts of climate change, including predictions of rising seas and increased storm surges. Save the Bay, an environmental organization and longtime opponent to development on the salt ponds, shared images exhibiting conservative projections of flooding scenarios affecting the salt ponds in 2049, accessed via the Adapting to Rising Tides program maps created by the San Francisco Bay Conservation and Development Commission.

David Lewis, executive director of Save the Bay, says the Cargill property should be restored to wetlands to “protect people and wildlife from rising tides.”

“There is too much at stake,” added San Mateo County Supervisor Dave Pine, who chairs the SF Bay Restoration Authority. “Building here will put people at risk, destroy fish and wildlife habitat and make traffic congestion on the Peninsula even worse.”

Added Dan Ponti, steering committee member at Redwood City Neighbors United, “The salt ponds have been designated as open space for years, and they should stay that way.”

In a statement, representatives of Cargill and DMB said there are no current plans to develop the site:

“We appreciate the community’s interest in the Saltworks site. We want to clarify, however, that nothing has been proposed for the site other than what it is now—an active industrial salt harvesting facility that can continue operations indefinitely. Our intent is to engage in a broad community conversation about potential future uses of the property to meet many already present needs of this community.”

In a media interview Tuesday, Supervisor Pine said it’s important that elected officials and community organizations “state no, very clearly and strongly, that this is not a site for development.”

Pine is a key driver in local efforts to respond to current and future climate change impacts, including the ongoing formation of the San Mateo County Flood and Sea Level Rise Resiliency District. The district has San Mateo County and all 20 incorporated cities within the county unifying to streamline and better fetch grants for cross-jurisdictional infrastructure projects protecting people, property and infrastructure.

The developer’s statement echoed the collective call to prepare for climate change impacts.

“We need to address our existing regional vulnerability to sea level rise, annual flooding of homes and businesses, crippling congestion, access to integrated public transit options on both water and land, housing, and habitat restoration,” the statement by Reimagine Saltworks said. “We look forward to engaging with all stakeholders in this region about the future of this property.”

In March, after learning about the potential for renewed interest in development, Redwood City Mayor Ian Bain said the saltworks site “is not zoned for housing” and that he had “no interest in changing that.”

Images for this story courtesy of Save the Bay 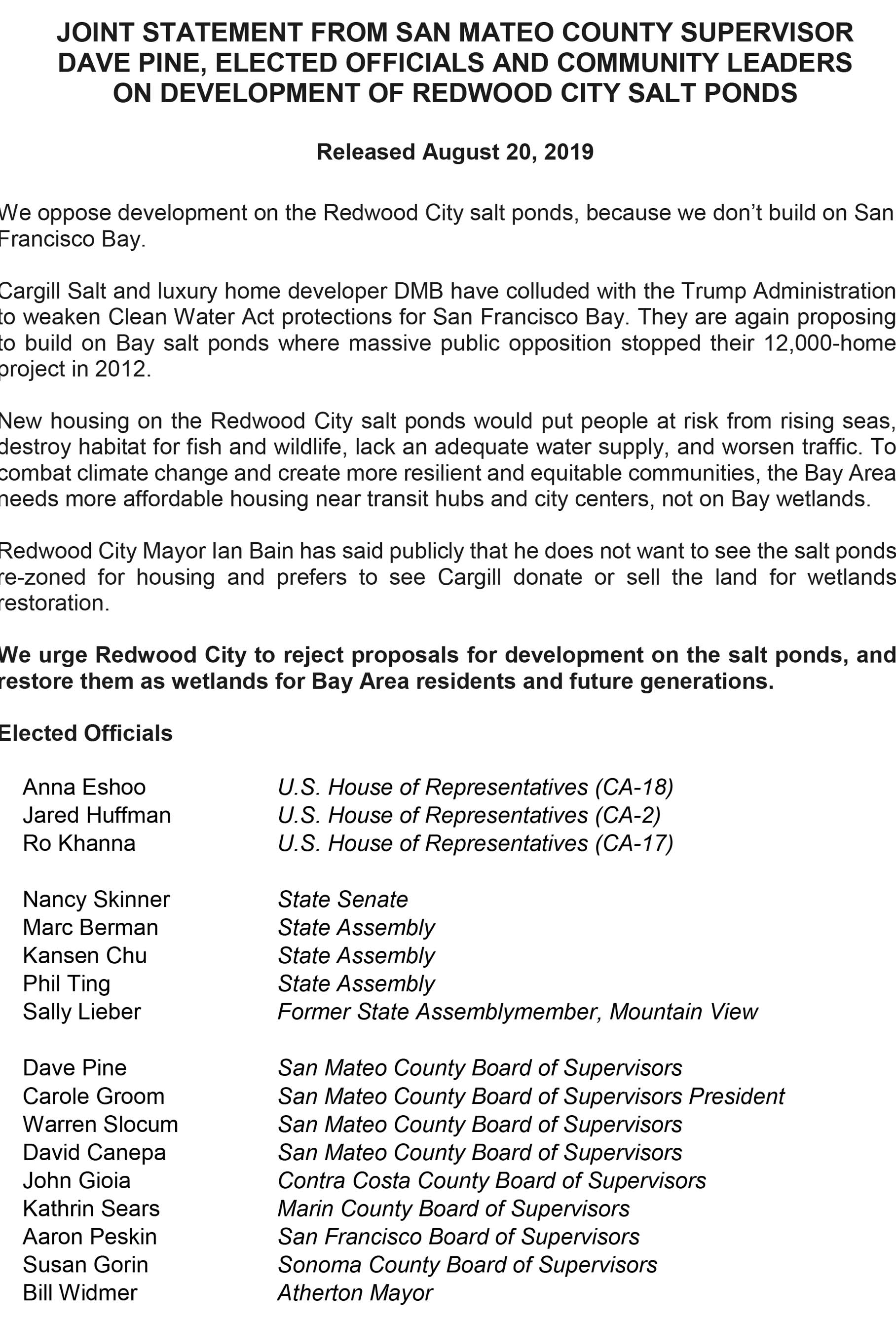 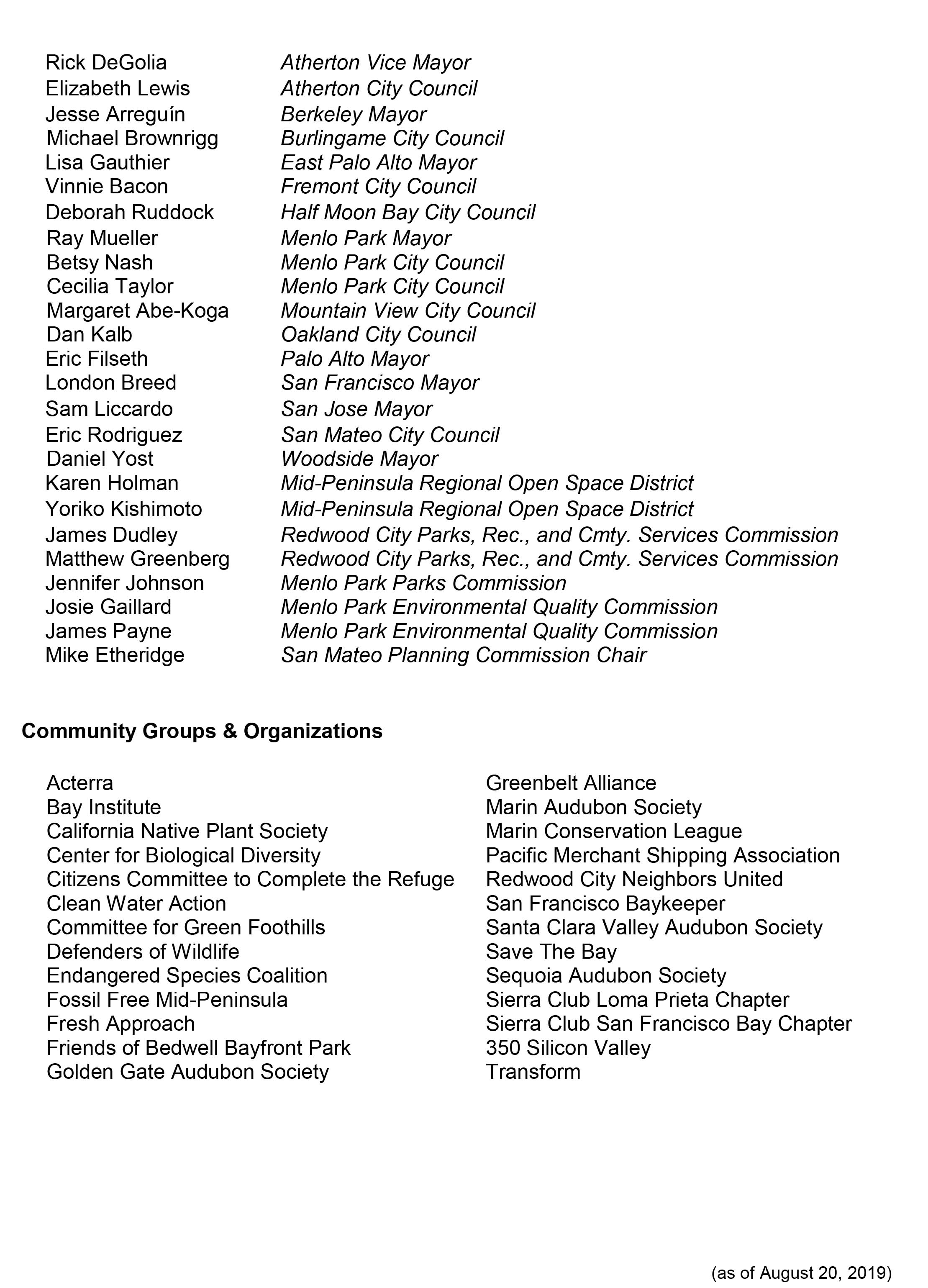 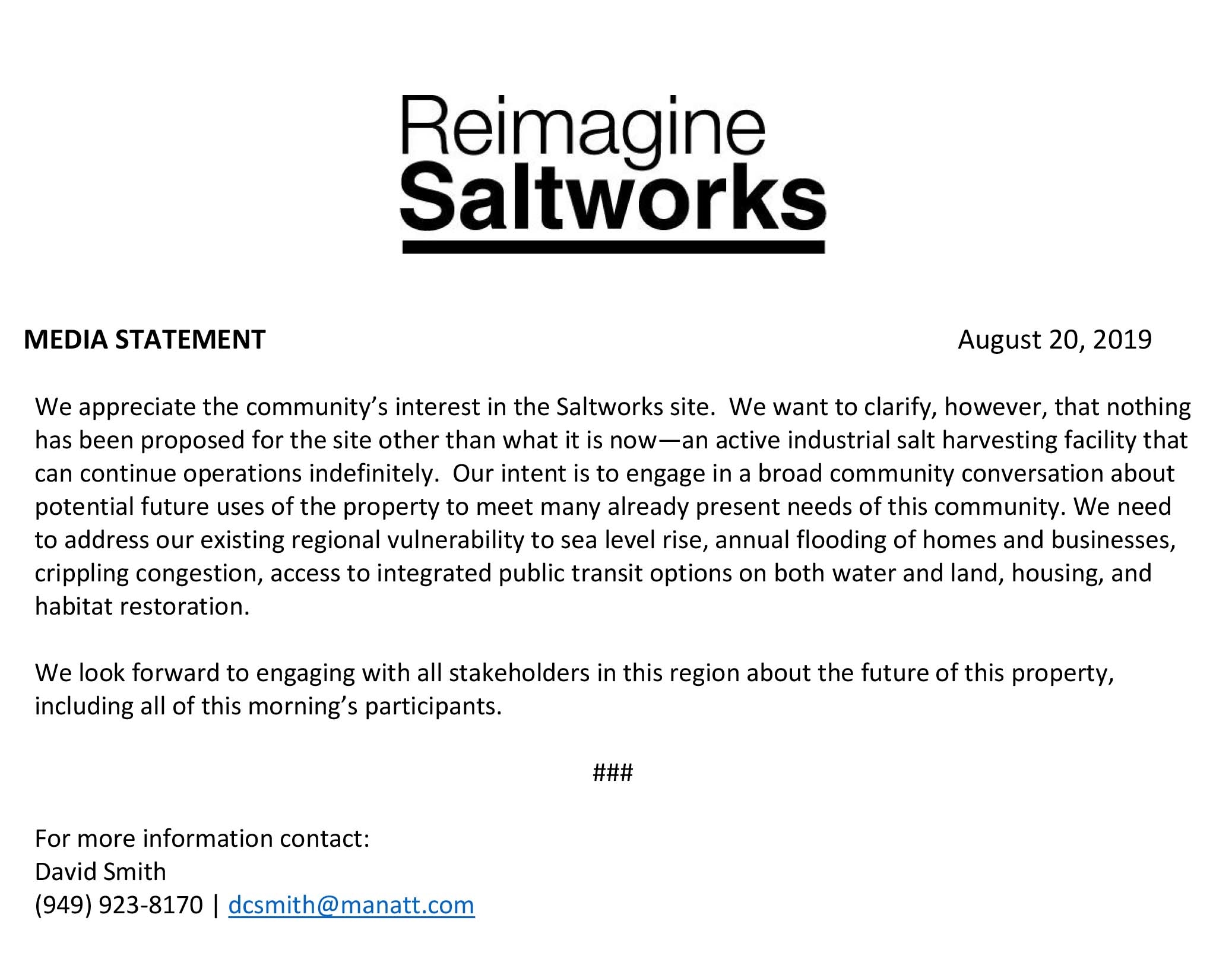