At its meeting tonight, the San Mateo City Council will consider joining the County and five other local cities in prohibiting the use of disposable plastics, including containers, cups, utensils and straws, at city food facilities such as restaurants, mobile food trucks, farmers markets and private schools.

On Jan. 4, the city mailed notice of the proposed ordinance, modeled after San Mateo County’s ordinance which passed in February 2020, to over 500 food facilities.

The County’s ordinance requires most disposable food service ware used by food facilities in unincorporated areas to be non-plastic and natural-fiber based compostable products (made from paper, sugarcane, wood, bamboo, wheat stalk, hay etc.), with some exemptions. See the County’s summary sheet describing its ordinance at the end of this story.

The County ordinance has since been adopted as a model by Atherton, Belmont, Burlingame, Half Moon Bay and South San Francisco. Due to COVID-19, enforcement of the ordinance in those cities and in unincorporated areas has been postponed until March 2022.

In 2013, San Mateo restricted the use of polystyrene-based disposable food service ware because it is not biodegradable and thus problematic to the environment. The plastic alternatives typically used in food facilities is also “a pervasive pollutant,” the city said. While convenient to customers, they’re “often used just for a few minutes before becoming waste that takes hundreds, if not thousands, of years to break down,” according to city staff. Due to contamination, many of those food-related disposable plastics are not recycled. A lot ends up as trash that pollutes local waterways.

In the fall, when city staff conducted outreach to local businesses on the potential ban on plastic disposables, some businesses expressed concern over increased costs and the quality and durability of compostable alternatives for certain food items.

Disposable food wares have also been an important part of business for local restaurants that have had to rely on takeout and delivery during the COVID-19 pandemic.

Tonight’s San Mateo County City Council meeting begins at 7 p.m. To view the agenda or learn how to watch it live, click here.

Editor’s note: An incorrect reference to Styrofoam has been removed from an earlier version of this article. DuPont de Nemours’ Styrofoam Brand Foam is used as rigid foam insulation in above and below grade applications, structural insulated sheathing, motorhomes, caravans and insulated trucks, in highways, tunnels and insulation pipes and even in the floral and craft market. But, the company states, “there isn’t a food container, cooler or packaging material in the world made from actual Styrofoam Brand Extruded Polystyrene (XPS) Foam.” 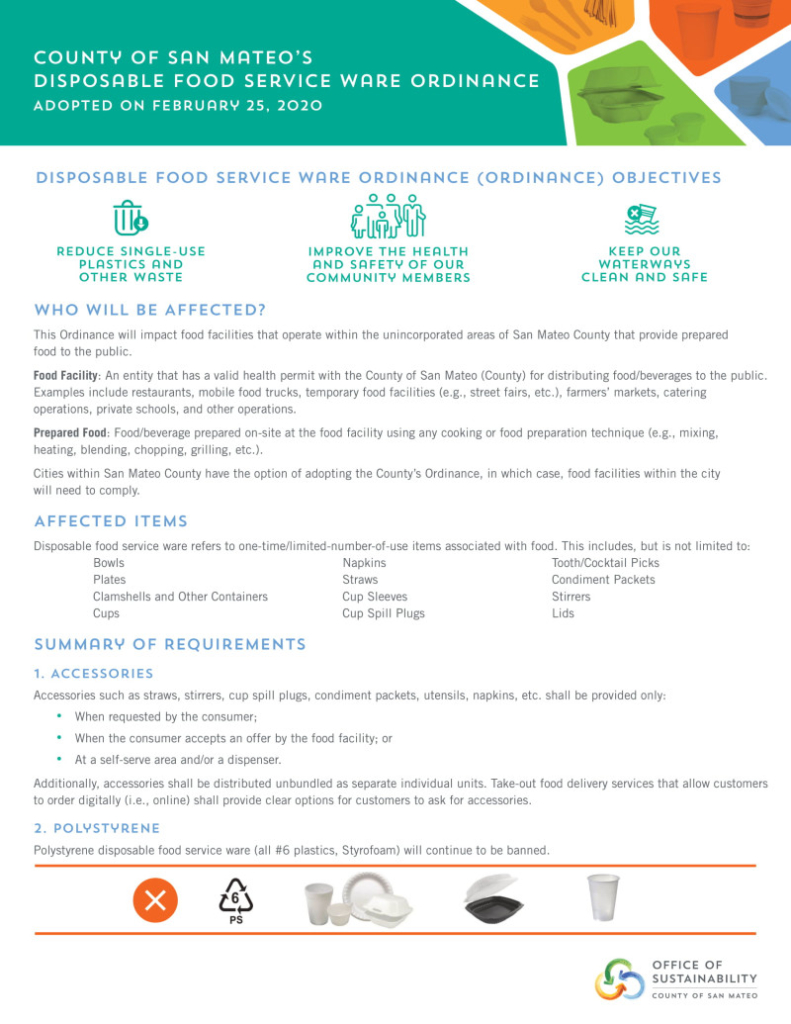 Fresh off a legal victory in San Diego County last week that
Need a new pair of eyeglasses? If so, you’re in luck. JINS
MidPen Housing Corp. and the Mental Health Association of San Mateo County
San Mateo County Libraries will take over operations of the Fair Oaks
Beginning Thursday, SamTrans riders who live and work in San Mateo County
Go to Top