A Redwood City cat who was transformed by training from a gun-shy semi-feral into quite a pussycat has won top prize in a national competition aimed at helping shelter cats become adoptable.

Matilda, a 2-plus-year-old tuxedo cat who came to live at Whis-purr Rescue, Inc.  in March 2019, has been named the Grand Prize Winner in the Third Annual Cat Pawsitive National High-Five Day Contest. Matilda’s paw-erful performance scored a $5,000 grant for Whis-purr Rescue, which will also receive personal consultation training with Jackson Galaxy, well-known as a cat behavior expert who hosts the Animal Planet show “My Cat From Hell.”

Lucy Brock, co-founder and rescue director of the center at 346 El Camino Real, says Matilda is just one of the shelter’s 27 cats who have benefitted since they started Galaxy’s training method in January 2020. “There’s been so much change in these cats’ lives since we started,” she says. “It’s just amazing.”

The cats have been learning to do “behaviors”—not to be confused with “tricks”—such as ringing bells, spinning around, playing a piano, “nose touches,” and sitting up, in addition to “high-fiving” with an outstretched paw.

This year’s Cat Pawsitive contest kicked off March 22, and Galaxy selected the top 25 high-five finalists for the public to vote on from April 8 to 14. Among the feline few was Matilda, whose bipartite bell-ringing/high-five combo was posted online for all to see.

Whis-purr Rescue staff and supporters pushed to get out the vote for the local girl.  Matilda’s clever bell-ringing high-five won 4,997 votes, according to a news release from the organizers, who say the contest celebrates the success of the life-saving Cat Pawsitive initiative of The Jackson Galaxy Project, a program of  Greater Good Charities.

The initiative aims to save the lives of shelter and rescue cats by increasing their adoption rates. Shelter staff and volunteers are taught how to implement Galaxy’s positive reinforcement training for cats and includes “a signature move—teaching them to high-five.” To see Matilda, go here, and also the semifinalists here.

Matilda and her sister Moxie and brother Maverick were rescue cats who came to Whis-purr from Half Moon Bay at about three months old. All three were “pretty feral and didn’t want to have anything to do with people,” Brock says.

Volunteer trainer Talia Martin can’t have cats of her own (her husband is allergic) so she’s happy to spend hours at the shelter training a dozen cats. Their behavior and reactions, down to body language, posture and making eye contact, have been recorded in a binder since the training started.

Gradually, curiosity—or perhaps the scent of treats—got the best of shy or invisible cats who began to come down from cat trees to train on the floor with Brock, Martin or volunteer Sydney Leung. One of the cats wouldn’t come close enough to be petted, Martin recalls. Now he grabs her hand.

Whis-purr Rescue picked up a cat called Ryder who was going to be euthanized at another shelter because he was “too feral,” Brock says. “We couldn’t pet him. And if you went to him, he’d run. And if you did stay, he’d whack you.” So she was quite surprised one day while training another cat when Ryder came weaving in and out between other cats, rolled around and started purring.

Brock wants to get more tips from Galaxy about moving Ryder to a higher lovability level. “We want to get him homed,” she says. “It’s great in this (training) room, but we need to be able to translate it into a home environment.”

A shelter cat, she adds, isn’t the “yippy skippy cat that’s going to come and get right up on your lap,” and it takes effort to bring out the pussycat within. “They’re becoming more adoptable every day,” Brock says. “And I’m not in a hurry. I just want to make sure they get the right home.” 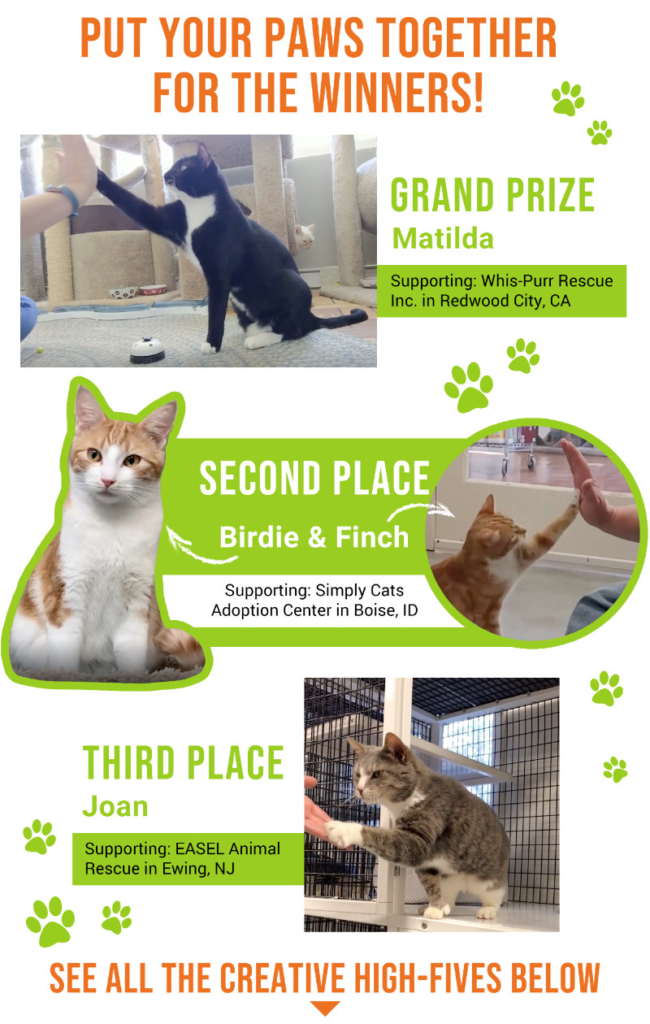