The outdoor dining program along two blocks of B Street in San Mateo is becoming a permanent fixture after City Council voted unanimously Monday to turn those blocks into pedestrian malls.

The blocks, between 1st and 2nd streets and between 2nd and 3rd streets, have been closed to traffic since June 2020 to allow for outdoor dining during the COVID-19 pandemic. The pilot was created as an economic boost for local businesses that were hampered by indoor dining restrictions. Its popularity prompted City Council to move toward passing a resolution and ordinance creating permanent pedestrian malls on the street.

The pedestrian malls will be closed to motorized vehicular traffic, allowing only delivery, service and maintenance trucks during limited hours (in mornings prior to 10 a.m.) and emergency vehicles. The emergency vehicles will require a permanent access lane at the center of the pedestrian malls, according to city staff. Adjoining businesses will receive permits to operate either outdoor dining or outdoor merchandise displays. The set-up for either type of outdoor operation will need to be removable to allow for public events and street maintenance, city staff said. The city envisions non-obtrusive outdoor operations with umbrellas and chairs, with or without light fencing.

The city aims to create the pedestrian malls in two phases, with the first, shorter-term phase including the installation of retractable bollards, adjustments to traffic signals and signage. The short-term phase is estimated to cost about $400,000.

Longer-term, the city envisions raising the level of the street to be flush with the sidewalk and exploring special pavers and landscaping. The longer-term phase is estimated to cost $3 to $4 million.

Two property owners objected to the proposal to permanently close the B Street blocks, including the movie theater between 2nd and 3rd and the owner of the property at 147 B Street between 1st and 2nd. The impact of the loss of roughly 60 on-street parking to people with disabilities was among the arguments raised by opponents. Members of City Council stressed the need to identify parking near the pedestrian malls to serve those community members.

Photo courtesy of the City of San Mateo 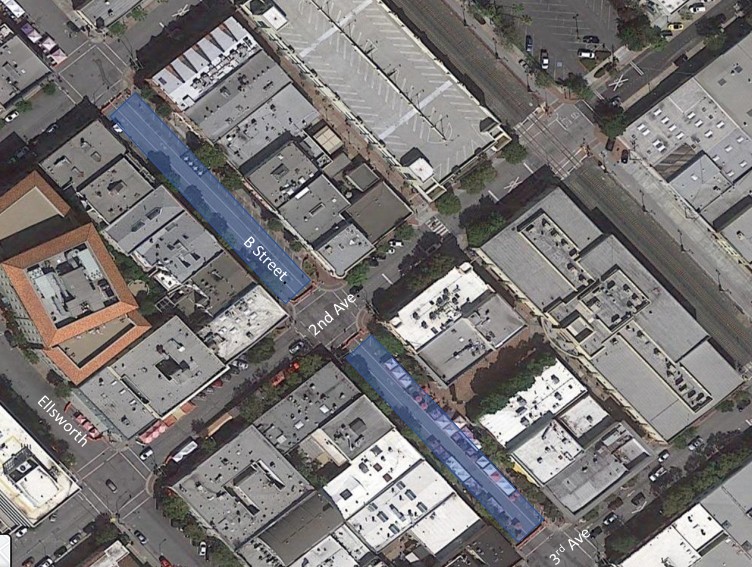 Redwood City will partner with the San Mateo County LGBTQ Commission on
A new event series is launching on select Sundays this summer at
By Kathleen Pender For millions who worked from home the last two
One of Redwood City’s oldest traditions—the Fourth of July Parade—is slated to
About nine months after filming in Redwood City wrapped, the first feature
Go to Top