When Dan Brown’s mystery thriller “The DaVinci Code” came out in 2003, it sold more than 80 million copies in its first six years. It was bested that same year by J. K. Rowling’s fifth book, “Harry Potter and the Order of the Phoenix,” which sold the same number of books in just six months.

That’s only two of the approximately 300,000 books published that year. By 2021, that number had grown to several million. But what happens to all those books after they get devoured by their buyers?  And where do the hundreds of popular titles public libraries buy go when they’re no longer getting checked out?

Thanks to secondhand bookshops like Encore Books in downtown Redwood City, as well as smaller ones run by libraries and volunteers, many books get resold, read, donated back and sold a third, fourth, or a fifth time—and sometimes even more. “We do everything we can to keep from having to put books into a recycling bin,” explains Redwood City Library Director Derek Wolfgram. But with about 224,000 books available in his branch libraries, the odds are that many can’t be spared that fate.

“The library policy says that whenever a book is worn, outdated or no longer being checked out, it’s time to take it off our shelves,” Wolfgram adds. He heaps high praise on Friends of the Redwood City Library volunteers who spend countless hours searching for new homes for culled books.

That’s similar to the process that San Carlos Library follows, according to branch manager, Jessica Koshi-Lum.  Used bestsellers and other nearly new books can be purchased for $3 at a small shop just inside the library.  A much larger room called the Annex on the second floor holds about 9,000 used books, which library volunteers sort through for their monthly sale days.

Janice Smith has volunteered with the Friends group for about 13 years (including three as president and 11 as a board member). These days her main responsibility is running the Annex and organizing the one-Sunday-a-month book sale.  Though the sale lasts only three hours, volunteer cashiers and helpers rack up about $2,000 in sales each month.

The Annex has about 25 regular volunteers, more than half of whom are responsible for specific sections like history, fiction, business and memoirs. The remainder are “floaters” and help wherever they are needed, such as in culling, “dotting” and shelving books.

Smith explains that the Friends use a “dot” system to weed out books that don’t sell.  When a book arrives at the Annex, volunteers put one of four colored dots on it. When books with the “oldest” colored dots have been on shelves for four months, they get culled.

That doesn’t mean they go into recycling bins. Over the years, books have been given new homes at the Palo Alto Veterans Administration Hospital, San Mateo County’s Juvenile Hall, a Costa Rican library, an elementary school in Kenya, Notre Dame School District, new teachers in the San Carlos and Redwood City school districts, and other worthy nonprofit projects. 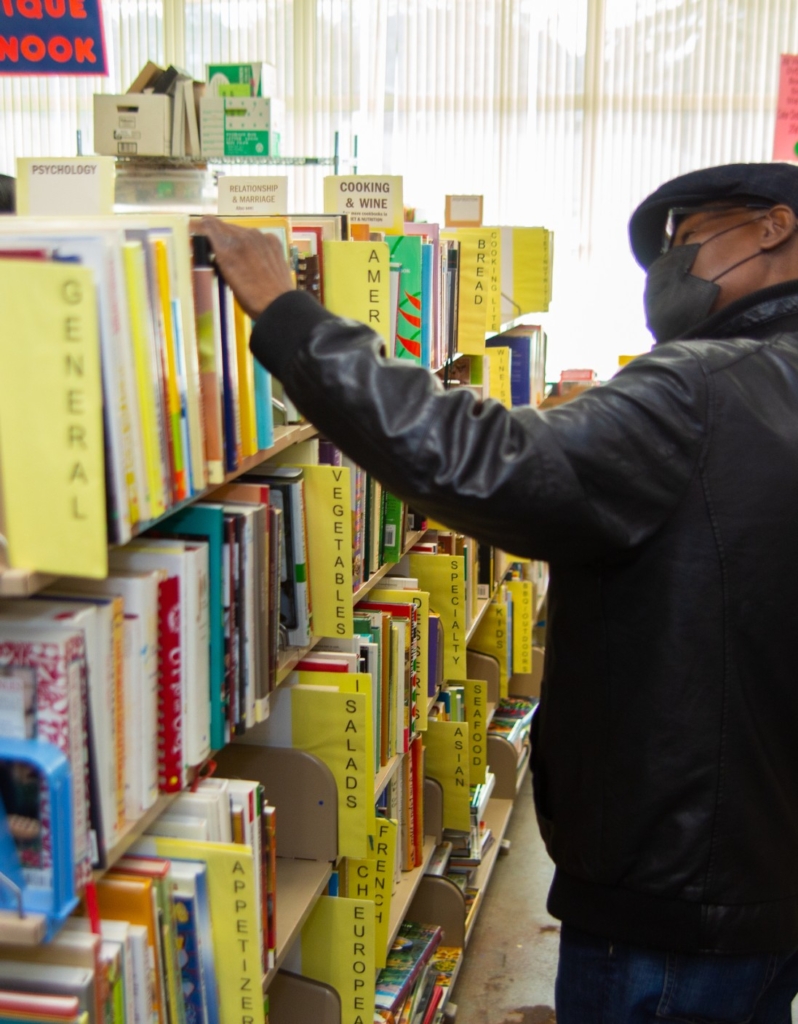 Tucked away in a corner of the San Carlos Library Annex is an area called the “Book Nook,” where vintage and antiquarian books are kept.  Roy Hoyer oversees this specialized area, which has received donations of several very old books over the years.

One notable treasure was a 1900 first edition of “The Wonderful Wizard of Oz” which, Hoyer recalls, sold for $750. “The buyer didn’t say exactly why he wanted it, but he likes to collect famous books.” Hoyer says it was in tattered condition with some missing pages, and adds “It would have been worth much more if it was in better shape.”

He gets help from volunteer scanners who assess donated books to decide whether to put them in the book shop, the Annex or the Book Nook. To determine a price for other special books, Hoyer checks the Amazon price, then lists them for half of that.

“Some of my customers come in every month or two to see what’s recently been donated,” he says, “because repeat visits can pay off with a real find.” Hoyer once got an early edition of Julia Child’s “The Art of French Cooking” which sold for $50 and three volumes of the 1747 edition of “The Memoirs of Sully” (prime minister to Henry the Great).

Smith estimates that the San Carlos Friends group gives the library about $40,000 annually, although in 2013 it donated $275,000 due to a large donation.  Over the years the Friends group has funded the purchase of some outdoor furniture for the library, as well for Healthy Cities Tutoring, special programs, equipment and library materials.

The Redwood City’s Friends group has a book shop near the front doors of the downtown library, and several other rooms to sort, clean and price books to sell. Friends President Mary Scavarda says about a dozen members show up weekly to sort donations—down from about 25 before the Covid pandemic. The Friends also stock a small book “kiosk” at the Redwood Shores library branch.

Pre-pandemic, Scavarda says the Friends group received about 30 bags of donated books each week, most of which get left in the library lobby.  Donors also bring new or like-new books to a monthly drop-off event, behind the downtown library. It was paused for seven months, but started up again in February.

“We sell a lot of our better inventory online via Spectrum Books (spectrum-books.com) with proceeds funneling back to the Redwood City Library,” she adds.  (They sell through Amazon and eBay as well.) Scavarda estimates annual online sales average between $20,000 and $25,000. 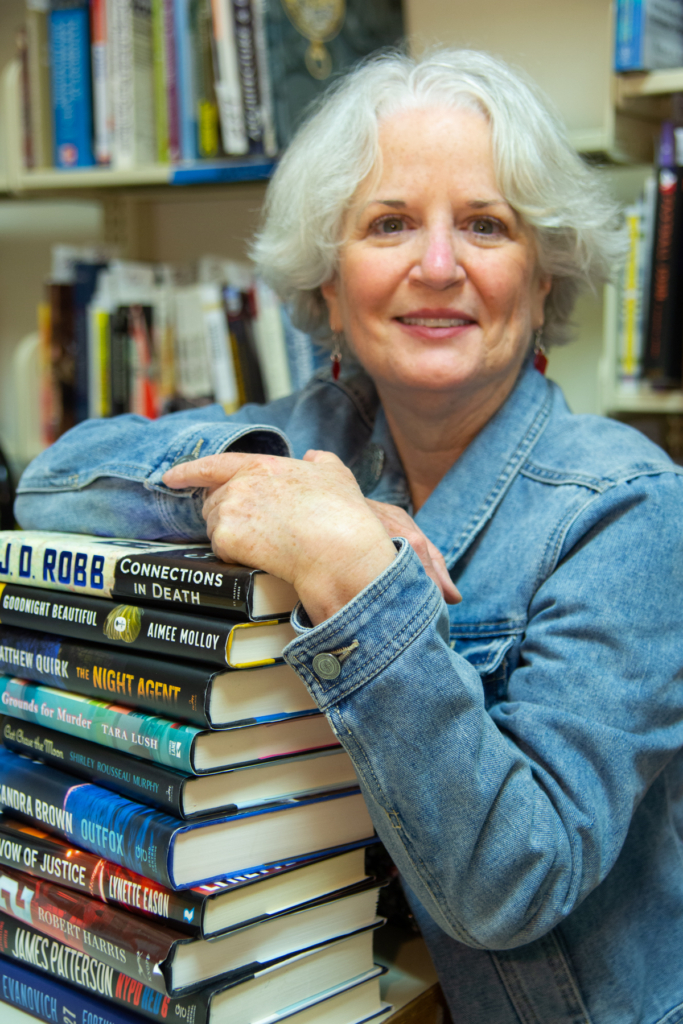 Her volunteers have discovered many unusual items among the donations. “We once found $300 and had no way of knowing who donated the book it was in,” she recalls.  Other, more prosaic items left in books include airline boarding passes, photos—and socks.

Overall, the Redwood City Friends group expects to fund about $93,000 in library projects this year, ranging from $31,343 for children’s programs, $5,000 for Spanish language programs and $1,000 for a traveling story time.

Bargains in the Basement

In downtown Redwood City people can score “gently used” book bargains—and other items like puzzles and comic books—at Encore Books, located in the basement of the San Mateo County History Museum.  Visitors explore four rooms chockful of books on nearly any topic.  Volunteers show people around or let them wander on their own.  Several changing book displays feature a topical theme (“love” was February’s), as well as a table showcasing a single subject like history or cooking.

Two rooms are stuffed with paperbacks—priced at 50 cents or $1—and there’s a cozy nook filled with children’s books so youngsters can explore, read and select their own books.

Volunteers Wally Jansen and BettyJo Fairclough show up most Saturdays to unlock the doors and help people find what they’re after.  Though Encore Books has 30,000 to 40,000 titles crowded onto the shelves, Jansen reveals there are more boxes in backrooms, not to mention some stored at his home because there’s no space at Encore.

“On many Saturdays there are people—and often boxes of books—lined up at the doors when we arrive to unlock the doors,” says Fairclough.  A volunteer for the past five years, she praises Jansen for volunteering a whopping 35 years.

Darlynne Wood, who’s  been a volunteer even longer, helps out on what she calls  a “hit or miss” basis. Her volunteerism, in fact, goes back to the days when the museum was at the College of San Mateo. “We had a book sale at San Mateo’s Borel Bank one year,” she says. (The bookstore relocated to Redwood City in 1999.)

Encore Books’ operation was also impacted by the pandemic and shut down for about six months, a closure that reduced the volunteer corps (many in their 80s).  New volunteers are coming on board, though, and Jansen and Fairclough hope to open two days a week soon.

All the money raised by Encore Books is funneled upstairs to the history museum.  “Before Covid, we took in about $20,000 a year,” Jansen says, “so our goal is to top that sometime soon.” Typically most paperbacks at Encore sell for $1, hardcover books for $2 to $4, and there’s specialized pricing for rare books and classics.

On a recent Saturday, Laura Praszker of Redwood City picked out several books to buy including one for a friend. A self-described “voracious reader,” she says she probably reads 80 books a year and collects antique books like “The Moonstone.”  After she finishes reading most of her book buys, she donates them to the library or to SAVERS (a Redwood City secondhand store).

Three middle-school students from San Carlos’ Tierra Linda School also were at Encore looking around. One, IIris Yan, bought a $2 book called “The Master’s Violin.”  “I love the classics because it’s like a window into people who lived long ago,” she explains.

The library stores and Encore are accepting books that are in reasonably good condition—and they also need more volunteers. “If you’re willing to volunteer, we’ll always find a job for you to do,” says San Carlos’s Smith.

For more information on these organizations, check out their websites at: friendsofrwclibrary.org, scfol.org and historysmc.org.