Redwood City attorney Ted Hannig has three passions — the law, sailing and philanthropy. He co-founded the Sequoia Awards, which honor volunteers in greater Redwood City, and chairs the Danford Fisher Hannig Foundation, which supports numerous local causes. In addition, he sits on the boards of various charities, including the Sequoia Hospital Foundation and Kainos, a home and training center for adults with intellectual and developmental disabilities.

In 2006, Hannig found himself unexpectedly involved in yet another cause — one that captured his love for sailing. It came through Redwood City’s Sequoia Yacht Club, of which Hannig is a longstanding member.

“It happened that the normal Wednesday-night sailboat race was on my birthday that year,” Hannig says. “One friend wanted to help me put on a dinner for 100 people as a birthday gift, and another wanted to donate money.”

Hannig wanted to honor three friends who had passed away: Pete Uccelli, owner of the former Pete’s Harbor Marina, and fellow yacht-club members Martin McDonough and David Crevelt. Hannig had an idea: Hold both a dinner and a race that encouraged fellow sailors to solicit contributions. Hannig asked if Sequoia Yacht Club members would be up for turning the next boat race into a fundraising event. All replied with a hearty “Aye!”

The first campaign, titled the “Give Something Back Race,” was intended as a one-time gig. It garnered $25,000. Its success inspired Hannig and crew to keep the ships sailing. After a couple of years, club member Kate Humphries surprised the assembly with a trophy that dubbed the race the “Hannig Cup.”

The 2022 Cup, on August 13, charted the event’s seventeenth year and drew its largest crowd ever. More than 170 people attended, and the occasion raised $3.7 million — nearly the total for the previous 16 years. To date, the Hannig Cup has collected more than $7.4 million for charity.

The first campaign, titled the ‘Give Something Back Race,’ was intended as a one-time gig. It garnered $25,000. Its success inspired Hannig and crew to keep the ships sailing. 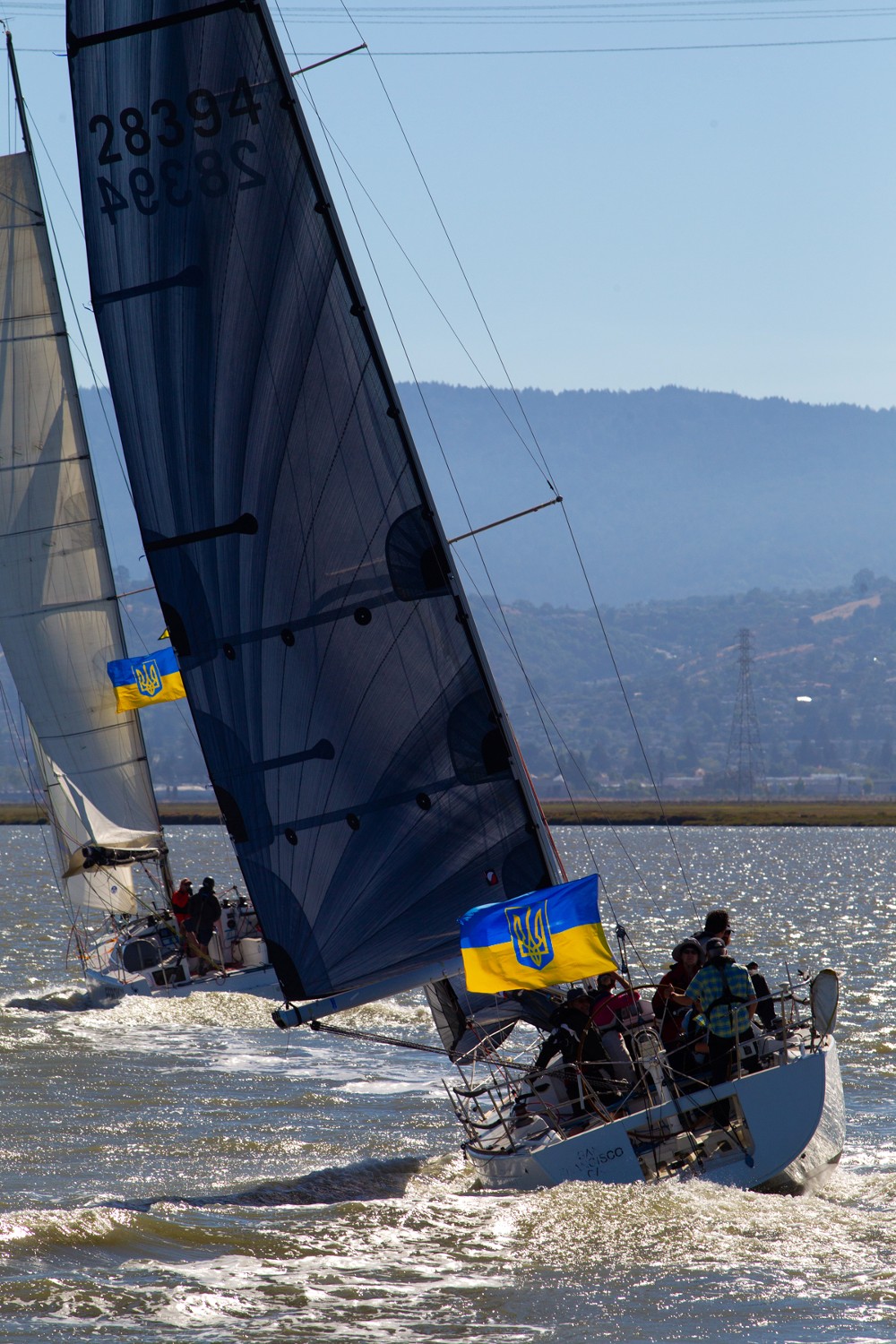 Hannig’s law firm and other sponsors such as Black Mountain Properties of San Carlos have also come through with substantial donations. All monies go directly to designated charities. More than 100 causes have benefited, including the Leukemia & Lymphoma Society, Doctors Without Borders, the St. Francis Center, the Ron Davis Autism Foundation and multiple youth organizations, to name a few. The event is 100-percent volunteer-run; ticket sales for the dinner support the Sequoia Yacht Club Junior Sailing Program. For the sailboat race, participants collect money for the charities of their choice. Foundations frequently match those gifts and provide even more.

Event organizer Kathleen Harris says the club offers fundraising challenges beyond racing. For instance, if each crew member wears a certain designated color, $100 is raised. This year, each boat flying the Ukrainian flag earned $1,000. Past events have encouraged costumes and decorations, such as a pirate theme years ago.

This story first appeared in the September edition of Climate Magazine

Recently, the organization announced the creation of the Hannig Cup Foundation, which will continue supporting selected charities and advocating for the most vulnerable, from people to the marine environment. Also, in 2015, Hannig sold his home in Woodside and purchased 100 acres of primary-growth rain forest in Dolphin Bay, Bocas del Toro Province, Panama. Recently, he donated the parcel to the Institute for Tropical Ecology and Conservation (ITEC).

“I have treated this property as my child,” Hannig says. “I have done my best to nurture it, protect it and prepare it for the future. But there comes a time as a parent when you know it is your time to step back. If you have done your job well, the future is something to behold and believe in, to be amazed by and not to fear.  That’s been the case with my daughter and now with this property.”

According to The Bocas Breeze, a local Panamanian news outlet, the donated acreage was conservatively valued at $3 million, and the property’s rare woods and animals caused appraisers to estimate a worth of up to $14 million.

According to its website, ITEC “provides field courses in tropical ecology to college undergraduates and graduate students. The courses offered include coral reef ecology, primate ecology, rainforest and canopy ecology, Neotropical herpetology, tropical bird ecology, animal behavior and canopy access techniques, among others. ITEC’s educational reach is international, and it has received students from all over the world; 42 countries and counting.”